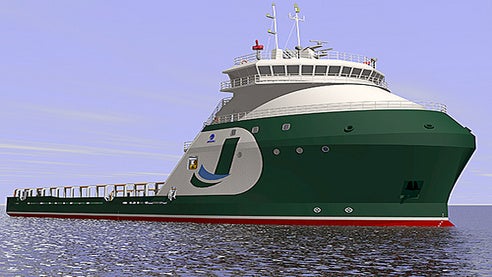 Jackson Offshore Operators has exercised an option with BAE Systems to build two additional platform supply vessels (PSVs) as part of a contract signed in December 2012.

Construction of the two vessels will be carried out at BAE Systems’ shipyard in Jacksonville, Florida, US, based on the GPA 675J PSV design provided by Guido Perla & Associates.

Each of the vessels will have a length of 76m, width of 18m and will be designed to serve offshore drilling operations in the Gulf of Mexico while complying with the US Jones Act.

BAE Systems said it had recently started construction on the first of the two originally-ordered PSVs at its Jacksonville shipyard; the vessels are scheduled to be completed in 2015.

Jackson Offshore Operators president and CEO Lee Jackson said: "Like our other previously announced vessels being built by BAE Systems, once delivered, these vessels will be deployed on multiyear contracts in the Gulf of Mexico."

Each vessel will be equipped with an integrated Rolls-Royce ship systems package comprising a low-voltage active front-end diesel electric system and a complete Rolls-Royce propulsion package with Azipull propulsion thrusters.

The newbuild contract is part of BAE’s efforts to increase new ship construction projects at its US facilities in Jacksonville, Florida and Mobile, Alabama.

Image: Jackson Offshore’s new vessels will be based on the GPA 675J PSV design and will serve offshore drilling operations in the Gulf of Mexico. Credit: BAE Systems.