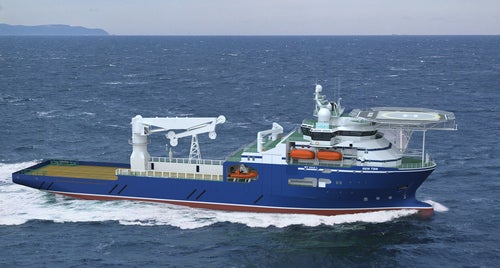 The vessel will be built to the MT6022 L design from Marin Teknikk in Tjørvåg and marks the fifth major construction vessel that Kleven will build for Rem Offshore, which has ordered a total of 16 vessels from the shipbuilder since 2006.

Rem Offshore CEO Åge Remøy said the market for construction vessels looks strong for the future, and the company has entered into long-term contracts for two of the three construction ships it currently has on order.

The vessel will have a length of 117m and width of 22m, and is scheduled to be delivered from Kleven’s shipyard in the second quarter of 2014.

Kleven CEO Ståle Rasmussen said the company delivered the LNG-powered offshore supply vessel Rem Leader in January 2013, and it has three construction vessels for Rem in the order book.

The delivery dates of the three vessels have been set for June 2013, February 2014 and the second quarter of 2014.

The vessel will be equipped with an offshore crane capable of lifting 250 tonnes at a 3,000m water depth, a 7.2m² moonpool and three remotely operated underwater vehicles (ROVs), of which two will be used for work and one for observation.

Image: REM’s new OSCV, to be built to the MT6022 L design, will be delivered in the second quarter of 2014. Photo: Kleven Maritime.