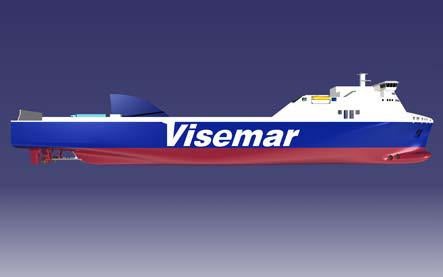 MAN Diesel & Turbo has secured a contract to provide a complete propulsion package for a RoRo vessel being built at Cantiere Navale Visentini yard near Venice for Italian ship owner Visemar.

Under the deal, the vessel will be equipped with two 9L32/44CR medium-speed engines.

Each engine will be capable of producing 5,040kW at 750rpm; the engines will be complemented by two Renk RSV 900C gearboxes and a pair of ALPHA CPP propellers.

The manufacturing of the engines, which comply with IMO Tier II regulations, will be carried out at MAN’s Augsburg facility in Germany.

MAN Diesel & Turbo said the new vessel has already secured a ‘green passport’ and green star certification, adding that it is one of the most efficient and environmentally friendly vessels in its class.

"Another important benefit is the engines’ unmatched performance in terms of minimum smoke emissions, even with lower-quality fuels like HFO [heavy fuel oil]," Tolgos added.

The propulsion system has been optimised by MAN Diesel & Turbo in collaboration with the Cantieri Navali Visentini shipyard and Italian RoPax/RoRo ship-design specialist NAOS.