Two new foreign-flagged vessels were detained last month, while six others were under detention from previous months. A total of four vessels still remained under detention at the end of February.

MCA is a partner in the Sea Vision UK campaign, and publishes details of the vessels detained in UK ports every month. This is in response to one of the recommendations of Lord Donaldson’s inquiry into the prevention of pollution from merchant shipping.

The campaign is aimed at raising awareness and understanding of the sea and maritime activities. 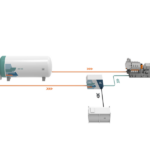 News
Wärtsilä and Hycamite partner on hydrogen production on board vessels

Surveyors from the Maritime and Coastguard Agency carry out inspections of foreign-flagged ships in UK ports and raise a deficiency when a ship is found to be not in compliance with applicable convention requirements.

The ship will be detained if any of their deficiencies are serious, and these must be rectified before they are permitted to leave.