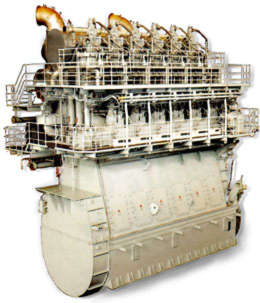 Mitsubishi Heavy Industries (MHI) is planning to develop a dual fuel version of its own low-speed marine diesel engines, which will run on both conventional heavy oil and natural gas.

Scheduled to be launched onto the market in 2015, the new engines will be added to the company’s UEC engine series, expanding the 2-stroke, low-speed marine diesel engine portfolio.

MHI will also develop a new direct fuel injection system, a gas-fuel supply system and control system, which will be components for dual-fuel use.

A preliminary trial on a single-cylinder test engine is expected to be completed by the end of March 2014.

The company will then conduct verification tests for full-scale engines with dual-fuel use capability and bring an 11,000kW-18,000kW class power output UEC-LSGi engine with a cylinder bore of 600mm onto the market.

For the UEC-LSGi engine, the company will use the diffusional combustion method, in which high-pressure gas, about 300 bar, is injected in the air compressed by the cylinder stroke and ignited by the pilot flame by a very small amount of fuel oil.

The method is said to provide good responsiveness to changes in gas fuel composition and sudden changes in engine load, compared with the pre-mixed combustion method, in which low-pressure gas is mixed with air and then compressed.

The engine will also be designed to operate with HFO only up to 100% engine load, which enables it to meet various operational needs.

Use of the company’s exhaust gas recirculation (EGR) technology, currently in development, and other techniques will enable the new engine to comply with International Maritime Organization (IMO) and nitrogen oxide (NOx) limits.

Image: After the launched in 2015, MHI’s new dual fuel engine will be added to the lineup of the Mitsubishi UEC Engine Series. Photo: Mitsubishi Heavy Industries