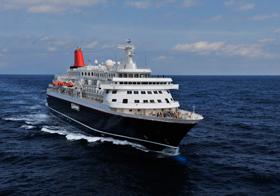 MHI’s Yokohama Dockyard & Machinery Works in Kanagawa Prefecture, Japan, will be responsible for the work, which will be performed on the two vessels Nippon Maru and Fuji Maru, between mid-December 2012 and the end of January 2013.

Nippon Maru underwent a major conversion at the Yokohama Dockyard in 2010.

Apart from the periodical mandated inspection, work will also be carried out to increase energy savings and passenger service, as well as installation of LED lighting and the upgrading of galley facilities.

Image: MHI will carry out repair and conversion work on the two vessels at its Yokohama Dockyard between December 2012 and January 2013. Photo: Mitsubishi Heavy Industries.