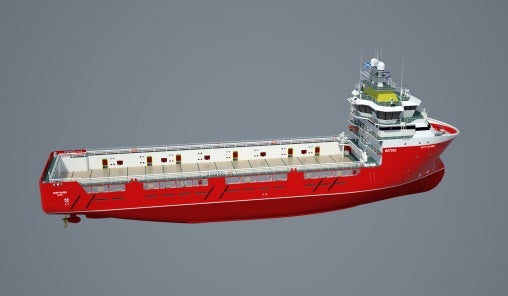 Offshore Ship Designers’ (OSD) UK division, OSD-IMT, has won a contract to design a modified version of its IMT 982 platform supply vessel (PSV) to be built at the new Honghua offshore oil and gas equipment shipyard in Jiangsu, China.

Classed with Lloyd’s Register of Shipping, the vessel will have maximum load of close to 4,000t at 6m draft. It will be equipped with a DP2 system, accommodate a crew of 28 persons and operate at a speed of 14.0 knots.

"The vessels will be built in USC’s Keihin Shipyard and are scheduled to be delivered from the third quarter of 2014."

The contract was secured via OSD-Shanghai, with OSD-Singapore offering design engineering and technical support for the modification. The basic class-approved design documentation and design licence was provided by OSD-IMT

In June 2012, OSD-IMT had provided design for six 3,700dwt PSVs ordered by Swire Pacific Offshore at Universal Shipbuilding (USC) in Japan, with an option for another four vessels.

The vessels will be built in USC’s Keihin Shipyard and are scheduled to be delivered from the third quarter of 2014.

According to Swire Pacific, the contract follows an order placed in 2011 for four OSD-IMT-designed IMT 997 5,000dwt PSVs at USC’s Maizuru Shipyard and four IMT 997 PSVs at the EISA Shipyard, Rio de Janeiro, Brazil.

Image: The IMT 982 PSV to be built at the Chinese shipyard will be equipped with a DP2 system and a diesel electric propulsion system, including four main diesel generators. Photo: courtesy of Offshore Ship Designers.