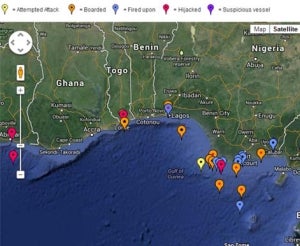 A wider range of ship types are being targeted, according to a global piracy report by the International Chamber of Commerce’s (ICC) International Maritime Bureau (IMB).

By contrast, the report revealed that Somali piracy has fallen to its lowest levels since 2006, with eight piracy incidents reported during the first half of 2013 in East Africa’s Gulf of Aden and Somalia.

According to the IMB’s report, pirate attacks off the coast of West Africa’s Gulf of Guinea almost doubled in 2012, with attacks in the region numbering higher than those in the waters around Somalia.