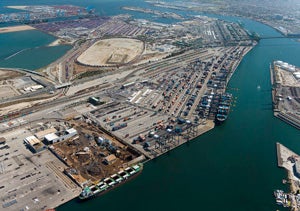 The EIS/EIR process, which is scheduled for completion in 18 months, is part of YTI’s proposed plan to deepen and improve its terminal facilities by enabling the terminal operator to accommodate next-generation vessels and increase cargo capacity at the site.

Port of Los Angeles executive director Geraldine Knatz said the port will work with YTI on the project, which will increase capacity and efficiency.

"Terminal modernisation and improvements such as those proposed by Yusen Terminals Inc. are key to the Port of Los Angeles’ long-term global competitiveness and success," Knatz said.

The proposed project will also include additional on-dock rail yard capacity for YTI.

The project follows the Port of Los Angeles’ $370m Main Channel Deepening Project, carried out with the US Army Corps of Engineers, which deepened the main channel to 53ft.

Yusen Terminals president and chief executive officer Patrick Burgoyne said: "These berth and wharf improvements will allow us to take full advantage of the port’s main channel deepening, accommodate next-generation ships at our site and keep us competitive in the marketplace."

YTI operates at the Port of Los Angeles under a 25-year term lease, which is valid until September 2016; the company aims to exercise its option to extend the lease for a further ten years.

Image: The EIS/EIR process, part of YTI’s proposed plan to deepen and improve its terminal facilities, will be completed in 18 months. Photo: Port of Los Angeles.

The Naval Vessels and Surface Combatants Market in Chile to 2024: Market Brief