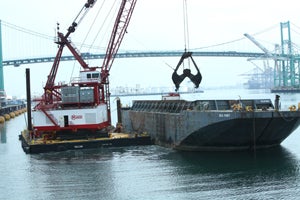 The Port of Los Angeles in the US has completed a 10-year, $370m channel deepening project to accommodate bigger ships.

Carried out by the US Army Corps of Engineers , the Main Channel Deepening Project has deepened the port’s main channel, west basin channel and east basin channel from 45ft to 53ft.

Under the project, the Corps removed approximately 15 million cubic yards of material from the channels and relocated it to various sites across the port.

Some of the material was used to build a 104-acre replacement shallow water habitat for fish and birds in the outer harbour.

Completion of the project means that larger cargo ships will now be able to access all nine shipping container terminals at the Port of Los Angeles.

Los Angeles Mayor Antonio Villaraigosa said: "Completion of this project means that the port will remain competitive globally and continue to be a strong source for jobs and regional revenue growth for years to come."

US Army Corps of Engineers’ commander of the Los Angeles District Mark Toy said: "The number of ships and the volume of goods they will bring, the number of jobs that will result, and the economic impact on the local area and throughout the nation are important numbers."

The port is also currently working on the $1.3bn Capital Improvement Program to modernise and upgrade terminals, in order to increase rail capacity and enhance roadway systems.

In April 2011, China Shipping , which operates the west basin container terminal at the port, completed a major phase of the terminal expansion project at the Port of Los Angeles.

The $47.6m project added a new 925ft section of wharf, 18 additional acres of back land and four container cranes.

US Army Corps of Engineers