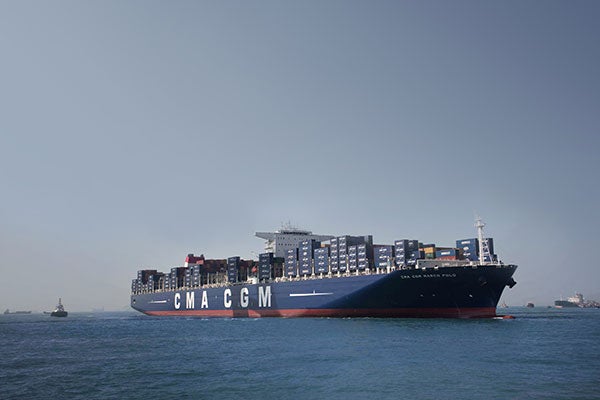 Sam Electronics, along with its associate L-3 Marine Systems in South Korea, has supplied its control systems for CMA CGM Marco Polo, the largest container ship in the world.

SAM has installed a NACOS Platinum navigation control system on the vessel, including X and S-band radars connected to three multifunction multipilot workstations.

The ship has also been equipped with an Ecdispilot for the centralised control of all main radar, Ecdis and conning operations, as well as those for automatic steering, track control and voyage planning.

The company has also equipped an integrated MCS Platinum monitoring and control system that leads all main ship operating components, which include 4,500 I/Os on a redundant LAN network.

The system also includes a series of seven high-resolution multifunction display consoles located on the vessel bridge and in central and engine control rooms.

Marco Polo, the first of a series of three 16,020teu vessels ordered by France’s CMA CGM at DSME, is powered by a Wartsila14RT-Flex96C low-speed diesel engine that produces a maximum power output of 80,080kW at 102rpm and enables smokeless operation at all speeds.

Delivery of the remaining two vessels, which are also being equipped with similar SAM Electronics platinum systems, is expected to be carried out later in 2013.

The Military GPS/GNSS Market in the United Arab Emirates to 2023: Market Brief

The Military GPS/GNSS Market in Saudi Arabia to 2023: Market Brief