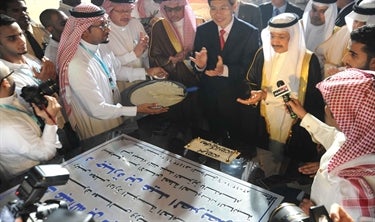 SGP is a joint venture firm between Singapore’s PSA International (PSA) and the Public Investment Fund (PIF) of the Kingdom of Saudi Arabia.

King Abdul Aziz Port is a major gateway on the Arabian Gulf and the new container terminal will help in serving the growing needs of its users, as well as contributing to the continued growth of Saudi Arabia and the rest of the region, according to the port’s director-general Naim Bin Ibrahim Bin Ahmed Al Naim.

SGP has secured approval from PIF’s board of directors for a loan to finance the construction of the new terminal and expects to sign the loan agreement soon.

PSA International group CEO Tan Chong Meng said: "PSA will work in partnership with the Public Investment Fund and the Saudi Ports Authority to enable the Saudi Global Ports Terminal to excel in container handling operations and transform Dammam into the preferred port of call to support the high trade volumes in the region."

Upon completion, the new terminal will have a quay length of 1,200m and 12 quay cranes, with a design capacity of 1.8 million teu per year, increasing the port’s total container capacity from 1.5 million teu to more than 3 million teu.

PSA said the new terminal will be equipped with the latest equipment and technology, and will be linked to the port’s existing railway network and highways to the rest of the country.

In July 2011, the Saudi Ports Authority (SPA) signed a SAR2bn ($533.30m) agreement with SGP to develop, operate and manage the second container terminal in Dammam.