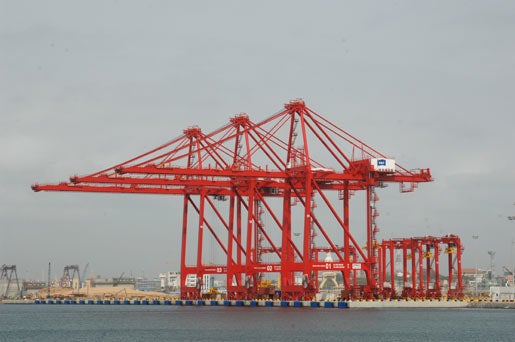 The South Container Terminal will have a capacity to handle handle 2.4 million containers per year and is expected to increase Colombo’s container capacity by about half.

The terminal is part of the expansion of the port, which can now handle mega ships of over 18,000teu capacity.

The East and West container terminals are currently in the planning stages.

After completion, the three terminals are expected to add a combined container handling capacity of 7.2 million TEUs to existing port operations.

"In the presence of Somalia pirates, it is safer for ships (from the Far East to Europe) to stop over at Sri Lanka and head to Cape of Good Hope without calling at Dubai port," Rajapaksa added.

Construction of the South Container Terminal was funded by $500m of private sector investment secured by CICT.

"The enhanced deepwater facilities at Colombo Port will strengthen its strategic position on the key Asia-Europe shipping route, and would significantly boost regional trade," Zhao said.