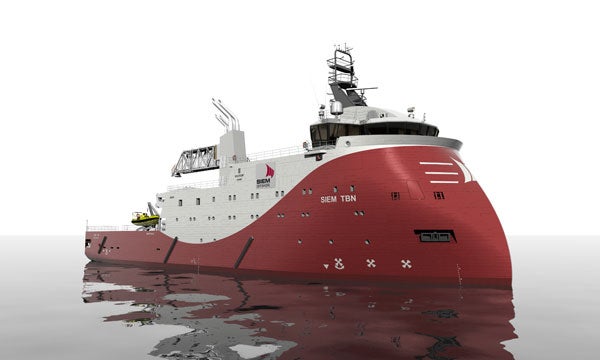 Ulstein, a Norway-based provider of ship designs, shipbuilding and system solutions, has received a contract to design an installation support vessel for Norway’s Siem Offshore.

Norwegian shipyard Fjellstrand will build the new vessel, with an option for a second identical vessel.

The vessel will be built on the Ulstein SX 163 design and will have a length of 74m and beam of 17m. Delivery is scheduled for March 2014.

Siem Offshore intends to operate the vessel within the offshore renewable energy and oil and gas markets to carry out installations, repairs, maintenance and general service duties.

Ulstein managing director of design & solutions Sigurd Viseth said: "The renewable energy market is a new segment for Ulstein, and we are very happy that Siem Offshore has chosen our design."

The vessel will be capable of accommodating 60 people and will be equipped with cranes as well as an active heave compensated gangway-based offshore transfer system that enables safe transfer of personnel to fixed and floating structures.

The new installation support vessel will run on a diesel electric propulsion system and will be equipped with two Voith Schneider Rudder ECS propeller units.

Siem Offshore said the new vessel will be the first Ulstein design to be built by a yard other than Ulstein’s own shipyard in Ulsteinvik.

Since 1999, Ulstein has sold 88 designs, 63 of which are equipped with the X-BOW hull line design.

Image: The new Ulstein SX 163 design vessel being built for Siem Offshore will be delivered in March 2014. Photo: Ulstein Group.