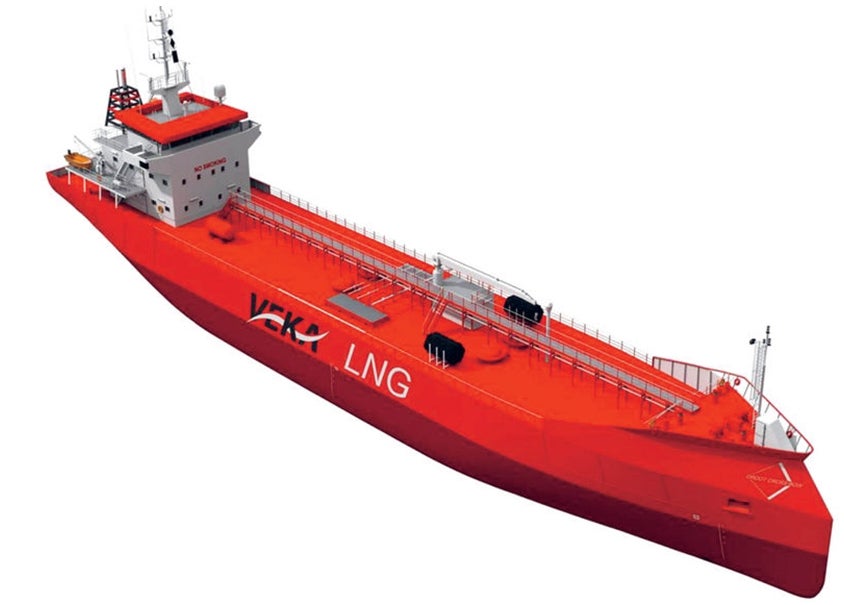 Two of the tankers will make short sea trips and provide coastal services, while the third tanker will be used as an LNG inland waterway bunker vessel.

The LNG inland waterway bunker vessel, the first of its type, operates without any emission on the ‘boil off’ of the load and is due for completion by late 2013.

Veka project manager, Robin Sijbrands, said the advantage of the engines is that they perform better than their dual fuel counterparts.

"Therefore only a very limited quantity of the LNG cargo is required for fuel consumption," Sijbrands said.

The company has already built a bi-fuel tanker, called Pioneer Knutsen, at its Bijlsma Shipyard that allows the engines of the ship to switch to diesel in case of insufficient ‘boil off’ availability.

Bijlsma Shipyard managing director Arend Bijlsma said that especially for this project the company has developed new technology for the storage of LNG and for the use of LNG as fuel for the propulsion engines.

"The combination of these two techniques made it possible to sail the tanker for a significant part on the ‘boil off’ (the gas that is released by keeping the load on the correct temperature)," Bijlsma said.

According to the company there will be a rapid increase in the use of LNG by ships for both coastal and inland shipping that will save about 25% of fuel costs.

"At this moment there are no small LNG tankers that can supply the LNG from the large terminals to smaller terminals or directly to ships," Bijlsma added.

Both tankers are equipped with a dual fuel engine that runs on approximately 25% on the ‘boil off’ and the rest on the LNG cargo making these tankers almost free of hazardous emissions.

Image: Two of Veka’s new LNG tankers will make short sea trips and provide coastal services, while the third tanker will be used as an inland waterway bunker vessel. Photo: courtesy of Veka-Group.