A New Dawn for Lobster Fishing 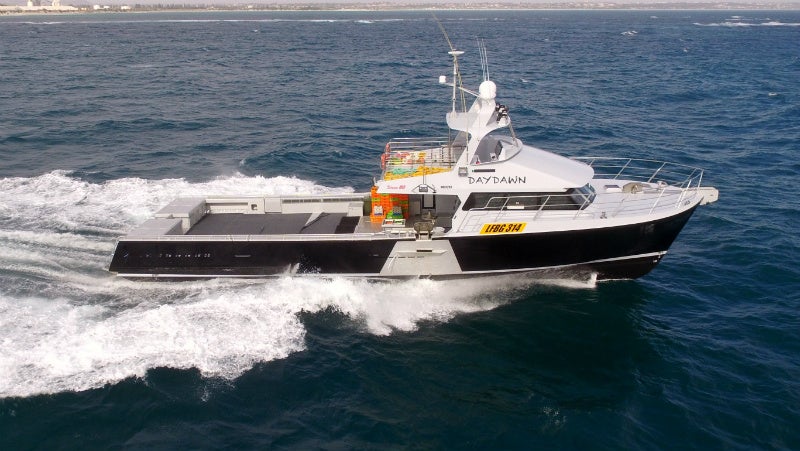 Does the launch of the biggest fast lobster boat yet built herald the start of a renaissance for the industry? We’re seeing positive changes out west and ‘Daydawn’ looks to be at the forefront of it all. For this reason and others we have chosen her to be the Best Lobster Boat of 2016.

Designed by Southerly Designs and built by Xtreme Marine, ‘Daydawn’ is a product of the changes that the lobster fishing industry has gone through in the past 20 years with reduced catch limits and increased costs in everything from labour to fuel and regulatory compliance.

The introduction of the quota system has changed the way a lot of people fish and increased the demand for bigger vessels which can stay out longer with more holding capacity. Hence ‘Daydawn’ is fitted with a live tank capacity for 180 baskets of lobsters. The owner’s earlier vessel had capacity for 102 baskets in its live tanks and after one season it was found to be insufficient, hence the arrival of ‘Daydawn’.

Customer demand for high quality lobster has resulted in the industry continuously improving how live-catch is stored. ‘Daydawn’ has possibly the most comprehensive system yet seen with both seawater and aeration pumps supplying the two catch tanks. Redundant pumps allow for a certain amount of equipment failure to occur without stressing the catch whilst two gensets guarantee the power supply.

She is the sixth vessel designed by Southerly for a client who has long appreciated the benefits of having designers with a background in lobster fishing. Other new touches that are sure to be seen more often on lobster boats in the future is the use of a FRP wheelhouse on the aluminium hull.

The FRP wheelhouse can be constructed elsewhere at the same time reducing overall construction time. The use of composite construction also results in a higher degree of finish and fairness compared to aluminium which would require significantly more man hours to reach the same quality.

Southerly is anticipating more industry consolidation along with acceleration in vessel renewals and upgrades throughout the fleet. "The new vessels coming into the fleet are broadly similar to the old but are benefiting from advancements in hullform as well as placing a greater emphasis on crew safety and comfort", said Southerly.

"Additionally the vessels all now require larger live tank capacity, with the catch limited by quota and a split pricing system in operation it is crucial that the catch be in pristine condition when landed at the processor and that there are sufficient tanks to cater for big days. The days of carrying excess catch on deck under hoses or the like are now well and truly over.

Large capacity, redundant sea water circulation pumps and aeration are now practically standard." Xtreme Marine is currently building its fourth large vessel in a row with another due to start in January. With most of the cray fleet around 20 years old, it is also anticipating upgrades and replacements keeping the firm busy for a while.

For Southerly Designs the downturn in the oil and gas sector has been countered by an upswing in the local cray fishing industry, which has returned to new building after a decade long hiatus. There has also been significant activity in the maritime security sector.

Beyond these areas Southerly has continued to expand its range and has gained some penetration into new sectors with current or recent projects in RHIBs, small workboats, tenders and wind farm service vessels and pilot boats in addition to its traditional core areas of fishing vessels, patrol boats and offshore oil and gas craft.

With this level of diversification in its design portfolio and an increasing recognition of its capabilities across all sectors, Southerly Designs is optimistic about the future in the near to medium term.