MissionEase Multiple-Boat Handling System to be Provided for Expedition Ships 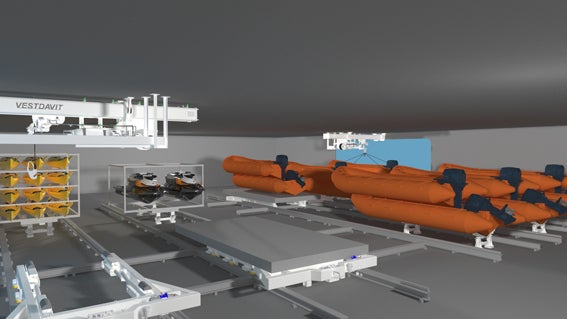 Vestdavit has begun to focus on how its MissionEase multiple-boat handling system for hangars and mission bays can make boat handling on passenger ships simpler and safer, as a new generation of ice-strengthened cruise ships and expedition yachts seek the spectacular destinations found in adverse environments.

First delivered to an offshore customer at the end of last year, MissionEase is equally at home in the luxury passenger vessel setting, where it can stow, launch and retrieve up to 24 ribs (typically of 7m-8m in length), kayaks, waterjets, and similar equipment.

MissionEase is simpler, quicker, safer and cheaper than any other boat handling system for mission bays. It brings together Vestdavit’s experience in naval and seismic ships to make the best use of any hangar or mission bay with a deck height of up to 2,900mm.

Rather than using overhead cranes within the mission bay, MissionEase works on a system of hydraulic cradles, which move boats safely from their stowage positions to maintenance, preparation, or launch areas.

It links seamlessly with single-point davits to deploy or recover boats from both or one side of the vessel, enabling one operator using a remote control to launch and recover the mission boat, including all on-deck handling.

"A mission bay allows the boats and other equipment to be stored, maintained, prepared and launched from a safe environment with a dry, freeboard. But the way existing systems rely on overhead gantries to move the boats within the bay can be dangerous, while slinging and unslinging can take time.

"MissionEase allows boats to be moved safely and quickly on cradles, even in high seas or during a vessel listing. The boats and other equipment are fed directly to the davits for launch, or feed directly back into the stow when recovered."

To find out more, please contact the company via the enquiry form.

Navies want to use unmanned surface vehicles (USVs). They will keep boatcrews out of high-risk environments and extend the outreach of surface vessels. There are...

World-leading provider of efficient and innovative boat-handling systems, Vestdavit, has released a new brochure showcasing its products and services.