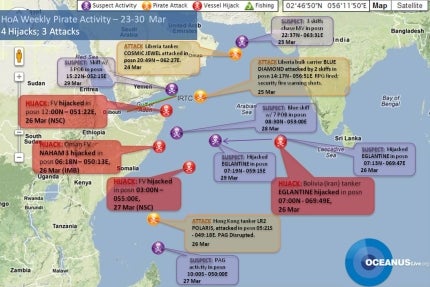 As of 28th March 2012, EU NAVFOR figures state eight vessels and an estimated 236 hostages are currently held captive by pirates. Somalia’s report indicates 327 hostages are held from 25 captured vessels, with a further 25 land based hostages, giving a total of 352 hostages.

“The EU has agreed to expand its mission against Somali pirates to include attacks on land targets.”

“The main concern is not to put lives at risk. A recovery operation is highly risky,” Manso said.

Bruno Pelizzari and Debbie Calitz are among the longest-held hostages in Somalia since being captured by pirates together with their yacht in the Madagascar / Mozambican channel, 16 months ago.

The EU confirmed its intention to extend the mandate of the counter-piracy mission, code-named Operation Atlanta, until December 2014. The decision effectively included an extension of the area of operation to include Somali coastal territory and internal waters.

The EU has also agreed to expand its mission against Somali pirates to include attacks on land targets. The ten EU warships operating off the Horn are now authorised to strike moored vessels and fuel dumps in “coastal territory and internal waters”.

Concern has arisen, however, that attacks on land are more risky with a greater chance for civilian casualties than attacks at sea. Experts have warned that any EU military successes could be overshadowed by civilian tragedies and that more must be done to address the root cause of piracy, in areas like Somalia, where statistics suggest that pirates make more money, and have higher life expectancy, than the country’s farmers.

Indian politicians are pressuring their government to intervene on behalf of crewmen of the hijacked MT Royal Grace. The Dubai-registered chemical tanker was captured by Somali pirates off the coast of Oman in March after setting sail from Sharjah. The crew of 22 consists of 17 Indians, three Nigerians, a Pakistani and a Bangladeshi.

“Bruno Pelizzari and Debbie Calitz are among the longest-held hostages in Somalia since being captured by pirates.”

Russia’s Northern Fleet, led by the Udaloy Class destroyer Vice Admiral Kulakov, will soon depart on a new anti-piracy mission off the Somali coast. The new task force will replace the Russian Pacific Fleet’s task force, headed by the Admiral Tributs destroyer, which completed its anti-piracy mission off the Somali coast in March.

NATO and Russia have also agreed that countering piracy is a common security challenge and have agreed to explore ways to strengthen cooperation in this area under the Nato-Russia Council (NRC) Work Programme for 2012.

Building on limited military tactical cooperation off the Horn of Africa, they are seeking to strengthen the exchange of information and coordination, and are considering possible mutual support, such as refuelling and medical assistance, for ships involved in counter-piracy operations.

“We are all actors in the same area and good cooperation between our forces will enhance the effectiveness in keeping the shipping lanes safe as well as mutual understanding of the Nato and Russian units,” said Rear Admiral (LH) Sinan Azmi Tosun, current Commander of Ocean Shield, Nato’s counter-piracy operation in the Gulf of Aden.

The United States joined representatives from nearly 70 countries, international organisations and the private sector at the United Nations, in New York on March 29, for the 11th gathering of the Contact Group on Piracy off the Coast of Somalia. One major achievement is the inclusion of post-piracy care for seafarers affected by piracy as part of its agenda.

Nato allies have also recently agreed to continue operation Ocean Shield through to 2014. The counter-piracy naval operation off the Horn of Africa will guard 2.5 million square nautical miles of water.

“Nato allies have also recently agreed to continue operation Ocean Shield through to 2014.”

The release of UK hostage Judith Tebbutt in Somalia has drawn attention to the British security firms which are increasingly dominating Somalia’s lucrative anti-piracy industry, reported the BBC.

The UK Government refuses to talk to kidnappers, opening the door for private security firms, such as Control Risks, to work out lucrative deals.

BIMCO, an international shipping association, has announced today the publication of GUARDCON, a standard contract for the employment of security guards on vessels.

According to BIMCO the contract has been developed following the industries unfortunate need to provide ship owners and private maritime security companies (PMSC) with a clearly worded and comprehensive standard contract, which governs the employment and use of security guards, with or without firearms, onboard merchant vessels.