Between 2012 and 2018, shipping greenhouse gas (GHG) emissions increased, according to the fourth and latest International Maritime Organisation (IMO) study.

Completed in 2020 but only released in full at the end of April 2021, the study is the latest version since a strategy to reduce GHG from ships was adopted by the IMO in 2018, which aimed to phase emissions out from shipping before the end of the century and at least, compared to 2008 levels, reduced by 50% by 2050.

According to the study – which was the first IMO study to distinguish between domestic and international shipping emissions – GHG emissions coming from all shipping industries increased by 9.6%, from 977 million tonnes in 2012 to more than a billion in 2018.

The majority of those were CO2 emissions, which in 2012 made up 962 million tonnes. 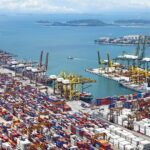 The reason, experts say, is the increase in maritime trade. Data from the UN Conference on Trade and Development showed that within the 2012 to 2018 timeframe goods loaded worldwide via sea increased from 9.2 billion tonnes to 11 billion tonnes.

CO2 emissions from international shipping have increased but at a slower rate compared with total shipping emissions, which continue to represent 2% of total CO2 emissions.

The study also showed that between 2012 and 2018 has improved both for international shipping in general, but also for most ship types. The overall intensity was 29% better compared to 2008 levels, in vessels there was an improvement of 32%.

The projections are inextricably linked to long-term economic and energy scenarios, increasing if economic rates are higher or reducing if the commitment to reducing GHG decreases. Although not completely assessed, the Covid-19 pandemic lowered emissions in 2020 and 2021 but its impact is expected to be overall low.

“The study demonstrates that whilst further improvement of the carbon intensity of shipping can be achieved, it will be difficult to achieve IMO’s 2050 GHG reduction ambition only through energy-saving technologies and speed reduction of ships,” said IMO Secretary-General Kitack Lim.

“Therefore, under all projected scenarios, in 2050, a large share of the total amount of CO2 reduction will have to come from the use of low-carbon alternative fuels.”

The report will for sure help the industry direction itself towards alternative fuels.

“This study can be used to tell us what we actually need to do, and how much we need to do, to reach the ambition level of the IMO strategy,” commented BIMCO Deputy Secretary-General Lars Robert Pedersen at the time of the report’s initial release.

“We can crowdsource funding from the entire sector to spend on innovation and technology needed to build zero-emission ships. When you add that to the big initiatives taken by some of the large companies in the industry, I think it is realistic to build a zero-emission ship by the end of this decade,” he said.