HHLA’s Supervisory Board has already cleared the transaction.

The deal is now subject to several competitions as well as foreign trade approvals.

Through this transaction, HHLA aims to fortify its relationship with CSPL, ensure long-term planning security for CTT, and secure capacity and employment at the Port of Hamburg. 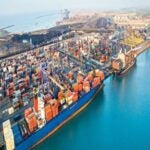 The deal is also expected to make CTT a ‘preferred hub’ in Europe and favoured transhipment centre for CSPL.

HHLA executive board chairwoman Angela Titzrath said: “Long-term, trusting customer relationships – like the ones HHLA has tended to for 40 years in trade with China are that much more important now.

“The first Chinese vessel was processed at Tollerort back in 1982. Since then, the terminal has become a hub for liner services of what is now Cosco Shipping Lines. Against this background, HHLA and Cosco equally pursue the goal of successfully securing the future of CTT and an even more efficient dovetailing of Chinese logistics flows in Hamburg.”

HHLA noted that despite this deal, CTT will continue to be accessible for all shipping lines.

With four berths and 14 container gantry cranes, CTT is one of three HHLA container terminals at the Port of Hamburg.

It includes a railway station featuring five tracks, which connects the terminal and the hinterland.

In a statement, HHLA said: “Through this strategic partnership with CSPL, it is not just CTT and HHLA that will benefit, Hamburg’s position as a logistical hub in the European North Range and for the Baltic region will also be strengthened.”

In September 2020, HHLA signed an agreement to acquire a 50.01% stake in the terminal Piattaforma Logistica Trieste in the Italian seaport of Trieste.