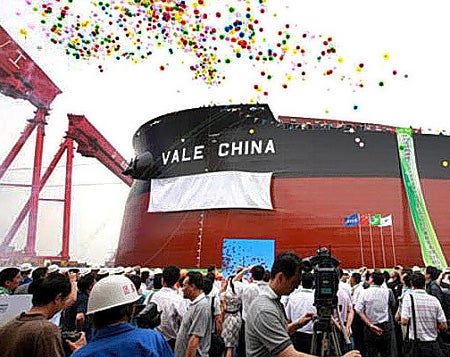 In July 2011 the VLOC was named ‘Vale China’ and Rongsheng Heavy claims it is the world’s largest dry bulk carrier with the largest cargo capacity, as well as incorporating the group’s most advanced shipbuilding technology.

China Rongsheng CEO Chen Qiang said Vale China represents the most advanced bulk carrier in the world and the technologies needed for building the vessel are far more challenging than those for building the typical 200,000 dwt VLOCs.

“The sea trial voyage of ‘Vale China’ has been successful, with an outstanding performance in cargo loading capability and speed. While the second and third 380,000 dwt VLOCs have also been launched, the group expects smoother delivery of other VLOCs.”

The ore carriers can carry up to twice as much iron ore as the capesize vessels to transport cargo between Brazil and China.

Vale has ordered the VLOCs in shipyards in China and South Korea and estimate to reduce transport cost by 25%.

Construction of the vessels is partly funded by loans from the Bank of China and the China Export Import Bank.

According to reports, China has yet to allow any of Vale’s VLOC vessels to dock at its ports, forcing the company to send its vessels to ports in Italy, Oman and elsewhere.

In August 2008, the company signed shipbuilding contracts worth $1.6bn with Vale for twelve 380,000 dwt VLOCs and ‘Vale China’ is the first of the vessels to be delivered in the coming two years.

In 2009, the Brazilian mining firm also said it would rent four VLOCs of the same type from Oman Shipping which planned to be built by China Rongsheng.