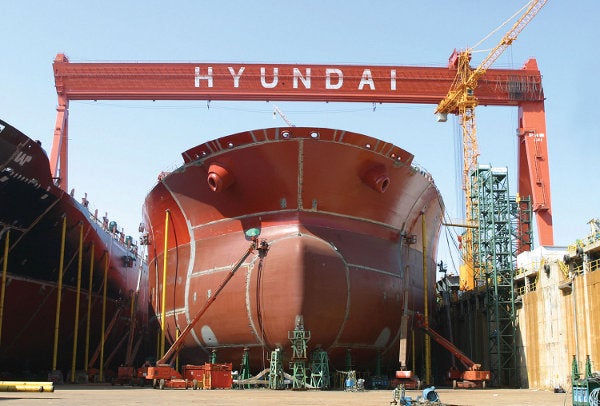 Hyundai Heavy Industries (HHI) is expecting its order growth to drop by 20% in 2012, amounting to less than half the orders it secured in 2011, due to the effect of the global downturn on maritime trade.

The company said the dip in profit was mainly due to the decline of its offshore business; however, its revenue increased 11.28% to KRW5.9tn ($5.2bn) compared with the KRW 5.3bn it reported during the corresponding quarter in 2010.

The South Korean shipbuilder won $22bn of new orders during the first nine months of 2011, led by orders for high-end ships such as drillships and LNG carriers reporting a year-on-year rise of 58%, reaching 83% of its annual target of $26.6bn.

The company’s shipbuilding division won orders worth $10bn, its offshore division won $3.3bn and its engine and machinery division $2.8bn, reporting a rise of 226%, 22% and 51% year-on-year respectively.

The company has seven business divisions and is now focusing on offshore facilities such as drillships to increase its order target to $5.2bn this year, up from the $4.8bn in 2011.

According to reports, HHI is currently bidding for some major projects, including building a floating production storage and offloading vessel worth $3.5bn in Nigeria.

Shipbuilders, including HHI, are trying to diversify their businesses as demand for commercial ships, such as container carriers and bulk carriers, is sluggish.