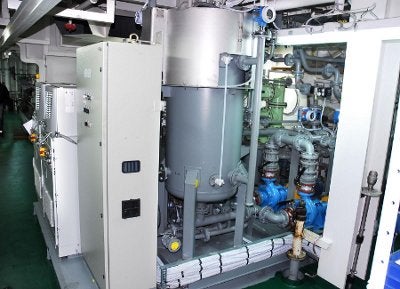 HHI’s new HiBallast system treats seawater by filtering and sterilizing bacteria and plankton bigger than 50 microns through electrolysis and can sterilise up to 8,000 cubic metre of water an hour.

The new BWT system has special coatings on electrodes which help in reducing power consumption as well as lengthen the product lifespan.

The new BWT system is the second ballast treatment system developed by the company and it has already received orders for HiBallast and EcoBallast systems to be installed in 30 ships.

The seawater needs to be treated as it can contain bacteria, local plankton, mud and sand from the unloading port where the ballast water has been taken in and as the ballast water is released, it might impact and disturb the marine ecosystem.

International Maritime Organization (IMO) has made it mandatory on the installation of BWT on vessels which are built from 2012 and in operation from 2017 in a bid to prevent marine pollution.

Hyundai Heavy Industries expects the market for ballast water treatment systems to reach more than $13bn by 2016 after the new regulation comes into force.

Earlier in 2011 the company delivered a 317,000dwt VLCC (very large crude oil carrier) to the Oman Shipping Company (OSC), which is equipped with the new electrolysis BWT system that can treat as much as 100,000 tons of ballast water.