A newly released risk map from Maritime Asset Security and Training (MAST) has revealed that conflicts and tensions in the South China Sea and sub-Saharan Africa pose a real threat to the maritime sector, including some of the world's most vital shipping lanes.

The MAST risk map indicates that 48 maritime crime incidents were recorded in the first quarter of 2017. Vessels being boarded by unknown assailants resulting in robbery accounted for 36 of the reported incidents, which in some cases led to the ship being hijacked.

Five and four incidents of criminal activities were also reported in South America and South Asia respectively during the same period.

The risk map logs international maritime incidents in real time and shows that the instability of Somalia and Yemen in the western Indian Ocean and the west coast of Africa is linked to a rise in piracy and criminal activity at sea, with 22 reported attacks in the first quarter of this year. 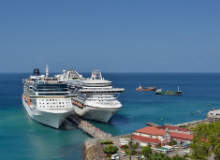 View All
"Vessels being boarded by unknown assailants resulting in robbery accounted for 36 reported incidents, which in some cases led to the ship being hijacked."

MAST further noted that in spite of considerable suppression of piracy in the Indian Ocean region, which was at its peak in 2008 costing the global economy around $6bn, the rising criminal incidents make the area a potentially dangerous route for commercial vessels and trade into Europe.

Poverty, famine and lack of opportunity have been cited as major drivers for piracy throughout the region.

International tension resulting from China’s approach to the Spratly Islands and South China Sea has also been highlighted as a potential cause for concern within the shipping community.

Additionally, the MAST risk map has reported a total of 17 maritime crime incidents across Indonesia, the Philippines and Malaysia.

Commercial vessels may already be re-routing around these islands, and any escalation of tensions in the area could lead to increased disruption of trade in the Far East.

MAST has urged the global community to work together to support those affected by the threats.