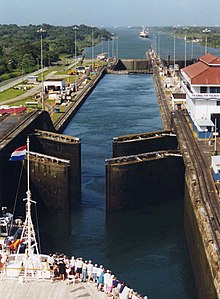 Panama Canal authorities have announced that the scheduled lock repairs and maintenance work set to begin on 23 September may disrupt traffic movement for nine days.

The west lane of Pedro Miguel Locks will be out of service for gate repairs and maintenance on the conductor slots and valves.

There will be intermittent lane outages on the east lanes of both Miraflores and Gatun Locks, to ease transit at the canal, said GAC.

The maintenance is expected to cause congestion and canal transit delays for ships, slowing down the normal transit capacity to 22 to 24 vessels instead of the average 33 to 36 vessels per day, solbergscott.com reported.

"There will be intermittent lane outages on the east lanes of both Miraflores and Gatun Locks, to ease transit at the canal."

"The booking slot available through the auction process, as well as the slots available for regular vessels less than 300ft in LOA, will continue to be offered during this period."

Recently, a new safety study of Panama Canal locks was commissioned to Fundacao Homem de Mar (FHM) following the confirmation of a leak on the Panama Canal’s new Cocoli Locks in August this year.

The Panama Canal extension, which is scheduled for completion next year, is expected to create a new lane of traffic along the canal through the construction of a set of locks, enhancing the waterway’s capacity.

Image: A lock on the Panama canal. Photo: courtesy of Stan Shebs