AET Innovator is the first in a series of four LSVs being built by Leevac Shipyards.
The first lightering support vessel was at Leevac's Jennings shipyard in Louisiana in June 2011.
The LSVs measure 57m in length and 14m in breadth.
AET Innovator under construction in Louisiana. 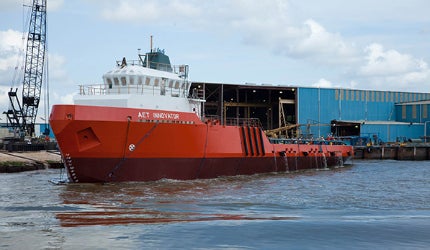 AET is one of the world’s leading providers of ocean transportation for petroleum. The company is also a market leader in the provision of lightering support services in the US Gulf of Mexico (US GoM).

In 2010, AET took a decision to build a new series of dedicated Lightering Support Vessels (LSVs) to support its ship-to-ship transfer business in the US GoM and to serve its clients more efficiently. These vessels are known to be the first purpose-built LSVs of their kind in the world.

An LSV mobilises specialist crew to the offshore lightering area to perform cargo transfer activity. The vessel also carries fenders, hoses and other equipment necessary for the lightering operation to be undertaken.

The first vessel, AET Innovator, was launched at Leevac’s Jennings shipyard in Louisiana in June 2011. She was delivered to AET four months later in October.

AET Excellence is the second vessel in a series of four LSVs being built by Leevac. She was launched in October 2011. The vessel entered service with AET in January 2012.

AET Partnership, the third vessel, was launched in February 2012. The fourth vessel is named AET Responsibility.

The EBDG design team collaborated with AET to develop the design of the LSV. The ship’s specifications were defined on the basis of AET’s client requirements.

The LSVs are designed to be easily built and operated with less piping, ballast and cargo tankage. High-lift rudders improve steering. The vessel’s bow design features minimal flare and an inward-canted side shell (tumblehome) for close-quarter manoeuvring. It also provides ease and safety when working close-aboard tankers offshore.

The LSVs are designed to carry more hoses and fenders and can stay out at sea longer. The vessels have the ability to carry additional supplies.

Each LSV measures 57m in length and 14m in breadth. The ship’s lightship weight is estimated to be 1,670t and working draft at stern is 3.96m.

"The LSVs are designed to carry more hoses and fenders and can stay out at sea longer."

Each specialised LSV is powered by twin CAT 3512C diesel engines, rated at 1,400hp each. These engines drive a pair of Sound propellers of 2m diameter each.

In addition to the two main engines, all vessels are fitted with two CAT C9s, each rated at 250kW, and a 99kW CAT C44 emergency generator set.