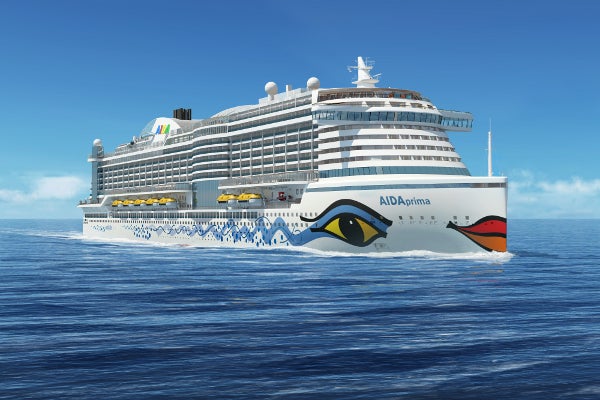 Construction on the first cruise ship began with the keel laying ceremony, held in the Tategami Plant of MHI’s Nagasaki Shipyard & Machinery Works in June 2013. The cruise ship touched water for the first time in May 2014.

AIDAprima embarked on her maiden voyage in March 2016, sailing from Yokohama, Japan, to Hamburg, Germany. The cruise vessel then started sailing from the German port of Hamburg all year round.

Design and features of the AIDA cruise ship

The Hyperion Class AIDAprima is the first cruise ship to use MHI’s proprietary technology Mitsubishi Air Lubrication System (MALS). The system forms small air bubbles, which cover the bottom of the vessel similar to an ‘air carpet’, thereby decreasing friction between the hull and seawater when sailing. MALS reduces carbon dioxide and fuel consumption by approximately 7%.

The ship is fitted with a detailed filter system, which reduces harmful emissions such as soot particles, nitrogen oxide and sulphur oxide.

The new cruise ship features 1,643 staterooms of 14 different categories to accommodate up to 3,300 passengers.

The luxurious Veranda staterooms vary in size, from 20m² to 2,520m², and feature walk-in closets, two bathrooms and a convertible sofa. They also have a 6m² sunning area with space for up to two sun loungers.

Deck eight of the vessel features Lanai staterooms, which feature a winter garden and a large veranda. The doors to the winter garden in the rooms can be opened all the way to create a 32m² of open, sunny area.

The 32 suites on-board the ship has 53m² of living space with up to 82m² of private sun deck. Each suite features a separate bedroom, a king-size sofa-bed, two bathrooms and a walk-in closet.

The most remarkable feature of the cruise ship is the weather-independent, transparent UV-permeable membrane dome of the AIDA Beach Club. The almost invisible dome-shaped membrane allows guests to relax in a beach atmosphere under palm trees, and serves as a screen for the projection of virtual starry skies and laser shows. Guests will be able to enjoy a multitude of activities on the 4 Elements deck, or have fun on the water slides of the AIDA Racer and enjoy other sports activities on the sports deck.

Other highlights of the cruise ship include a 45m-high glass skywalk at the stern of the ship, and glass elevators connecting the outer areas of the vessel.

The spas and wellness treatment venues on-board the ship includes a Body & Soul Organic Spa, saunas, indoor and outdoor pools and a tepidarium.

The AIDA Plaza comprises shops and bars and can be transformed into a stage for street artists and meetings. There is also an expanded theatrium, which houses a circular stage, advanced LED technology, aerial performance equipment and an interactive floating globe.

"Highlights of the cruise ship include a glass skywalk at a height of 45m at the stern of the ship, and glass elevators connecting the outer areas."

The new cruise liner has a variety of dining options, including 13 restaurants and 18 bars. It features some classical dining options, such as the Markt Restaurant, Bella Donna and the Fuego buffet family restaurant, and service restaurants such as French Kiss and Casa Nova serving French and Mediterranean cuisines respectively. The Scharfe Ecke offers currywurst recipes.

The ship features an exclusive Spray Bar spread across two decks and operated in cooperation with Moët & Chandon. The stern side features the Lanai Bar on Deck 8, while guests of the Patio Bar on Deck 16 at the bow of the ship can enjoy the same view as the captain. Other bars include the nightclub Nightfly, club D6 and M Bar, as well as Tapas & Bar.

Engine and propulsion of the AIDAprima

Contractors and suppliers involved with the AIDA cruise liner’s build

The engineering drawings of passenger staircases were provided by Sance-Sandelin in collaboration with Naval Interior Team (NIT).

Elomatic provided its expertise in co-ordinating the design of a number of fire zones on-board the ship using Nupas-Cadmatic and MHI Mates software. Elomatic is also providing coordination and supervision at the Nagasaki yard, as well as interior design for the spa area.