PEGASIS (Power Efficient GAS Innovative Ship) will be the most environmentally-friendly cruise-ferry to operate in the UK waters.
Brittany Ferries' new cruise-ferry will be constructed by STX france and will be delivered in 2017.
PEGASIS is a result of STX France's Ecorizon research programme. 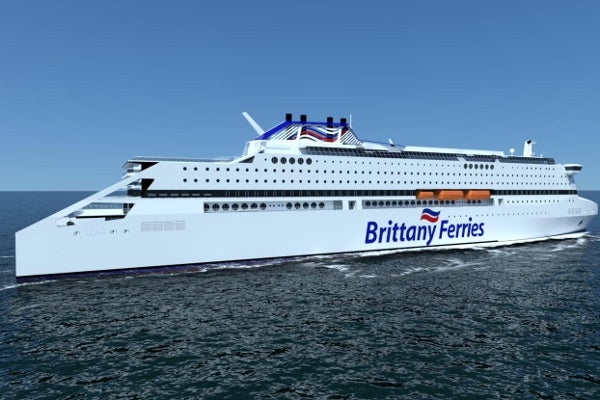 Brittany Ferries placed an order for a new cruise-ferry named PEGASIS (Power Efficient GAS Innovative Ship) in January 2014. The new gas-powered cruise ferry will be the biggest in the company’s fleet, and the most environmentally-friendly cruise-ferry to operate in the UK waters when it starts sailing in 2017.

Construction of the ship is slated to commence in early 2015, and will be carried out by STX France in St. Nazaire. The ferry is expected to cost €270m ($365m approximately) and consume 2.6million hours to build.

It will replace Pont-Aven, the flagship of a leading French ferry and holiday company, which is expected to be moved to the Portsmouth-St Malo route. The new environmentally-friendly liquefied natural gas (LNG) fuelled vessel will operate on the longer routes between UK and Spain.

The PEGASIS concept resulted from STX France’s Ecorizon research programme, which studied the application of LNG on a larger passenger vessel sailing within an emission control area (ECA). Brittany Ferries became a partner in the research programme in 2011 providing design input data.

The new vessel exceeds the latest regulatory requirements on exhaust emissions being imposed by the International Maritime Organisation (IMO), that are set to take effect in January 2015 with a series of changes to the European MARPOL rules.

The ferry will feature 12 decks and 675 cabins including 12 Commodore Suites, each with its own balcony, 51 Deluxe cabins, 30 pet-friendly cabins, and 15 wheelchair-accessible cabins. The vessel will accommodate 2,474 passengers and 189 crews.

"The design of the vessel provides for a 15% increase in payload capacity compared to conventional cruise-ferries."

The design of the vessel provides for a 15% increase in payload capacity compared to conventional cruise-ferries. The ship will be capable of carrying 800 trucks on three decks.

The PEGASIS is also touted to become the first cruise-ferry in the world to use the technology for storing LNG fuel at close to atmospheric pressure rather than at high-pressure. The vessel’s LNG tank will be constructed using Gaztransport & Technigaz’s (GTT) Mark III insulation system. The LNG will be stored on the outside deck and the gas pipes will be completely enclosed by double pipe or duct.

Facilities onboard the PEGASIS ferry

PEGASIS will feature an indoor swimming pool, two cinemas, restaurants, pet kennels, a quiet reading lounge, an observation area, and a spa treatment room with panoramic views. Wi-Fi will be available throughout the ship, including the cabins.

Public spaces aboard the cruse-ferry will cover an area of approximately 4,500m2. Two children’s play areas, a teenager zone, three bars and a high-tech stage area will be built.

The vessel will run on dual fuel engines with a total installed power of 45MW, using LNG as the primary source of power and marine diesel as back up. A highly-efficient electric propulsion will also be integrated into the ferry. The vessel will possess a maximum speed of 24.5kt.