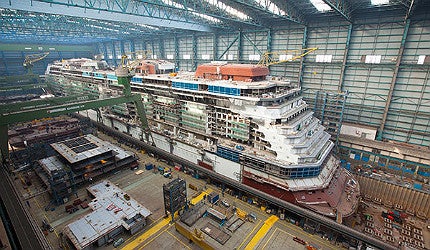 With supply chain disruptions and inflation creating new challenges for delivery teams, design-build projects are booming. This e-book looks at the 3 essential tips a project delivery team must consider when delivering a successful Design Build project.
by Oracle
Thank you.Please check your email to download the eBook.

Orders for the construction of Solstice-Class ships

The Solstice-Class cruise ships were built by Meyer Werft at its Papenburg Shipyard in Germany. The first of the five vessels was ordered in July 2005.

This order also had an option for a second ship. It was exercised in February 2006. The third vessel was ordered in July 2006. The orders for the fourth and fifth ships were placed in May 2007 and February 2008 respectively.

Production of steel for Celebrity Reflection, the fifth ship, was launched in March 2011. Keel laying of the vessel was held at Papenburg in September 2011. A series of tests and engine trials were conducted in the Dutch port of Eemshaven in September 2012.

Delivery of Celebrity Reflection marks the end of the construction of Solstice-Class series of cruise ships which required a total investment of about €3bn.

“Special underwater paints are used to improve resistance, which in turn will reduce the requirement of propulsion power.”

In order to accommodate the additional deck and to maintain balance while cruising, the vessel’s beam has been elongated by more than 3ft. Elongation of beam has enabled Celebrity Cruises to add extra space to some of the existing venues such as the outdoor decks which will have 245 new sun lounges and the theatre will accommodate 45 more seats.

Creation of extra space has increased the vessels overall size by 4,000t. Tonnage of Celebrity Reflection is 126,000t, while all the previous vessels weigh 122,000t.

Celebrity Reflection’s energy saving features are better than those of her sister ships. She is fitted with highly efficient illumining and LED lights. Heat exchangers are installed for efficient heat transfer. The vessel also makes use of heat and cold recovery systems.

Special underwater paints are used to improve resistance, which in turn will reduce the requirement of propulsion power.

Celebrity Silhouette is the fourth of five cruise ships in the Solstice-class operated by Celebrity Cruises.

A total of 3,046 passengers can be accommodated in 1,515 cabins. On average, all standard cabins are more spacious than those on the previous four vessels.

Less than 10% of the total passenger cabins are inside. About 90% of the outside cabins are provided with private balconies.

Celebrity Reflection claims to have a number of industry-first venues. One such place is the The Lawn Club Grill, a speciality restaurant where passengers will be allowed to grill their own meat. This venue is built in place of Corning Glass Museum present on the first three ships in the Solstice-Class.

“Celebrity Reflection claims to have a number of industry-first venues.”

Located on the top deck of the vessel is the Lawn Club, a dedicated area that features a natural lawn.

The Porch is another new venue on Celebrity Reflection. The 48-seat restaurant is placed next to the The Lawn Club and will offer food for breakfasts and lunch. Speciality coffees, beer and wine will also be served here.

The Art Studio is integrated within the area of The Lawn Club. It will be used for art demonstrations. The Alcoves, also within the The Lawn Club boundary, is a cabana-style private retreat venue designed for two to four guests.

Michael’s Club is common on all the ships operated by Celebrity Cruises.

Celebrity Reflection is equipped with four MAN diesel engines. The two 14V CR units are rated at 16,800kW, while the other two 12V CR engines are rated at 14,400kW. The combined engine output stands at 62,400kW and propulsive power at 35,000kW.

The ship is also fitted with diesel-electric azimuthing pods.