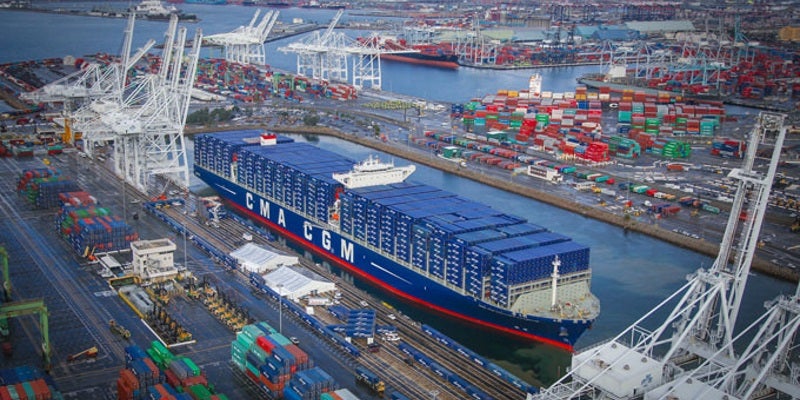 Named after one of the Founding Fathers of the US, Benjamin Franklin was delivered to its owner in December 2015. The vessel was officially launched and christened at Long Beach port in California in February 2016, and became the biggest container ship ever to call the US port.

The container ship will be deployed on the Pearl River Express, a service connecting the main China ports, including Xiamen, Nansha and Yantian, with the US West Coast ports.

Benjamin Franklin’s design is similar to most big vessels of the company’s fleet. It features a unique higher castle located at its front, enabling it to optimise the space while providing improved visibility from the bridge and a better torsion resistance.

The optimised hull design improves the vessel’s propulsion in the water. The ship’s layout allows positioning of fuel tanks below the castle. The double hull design protects the fuel tanks, making the vessel compliant with the MARPOL 12A regulation.

The design also includes raised lashing gateways for the support of containers and external lashing, as well as new twist locks for improved safety.

At a length of 1,300ft, width of 177ft and height of 197ft (the highest antenna at 230ft), the giant vessel is longer than the Empire State Building, wider than an American football field, and taller than a 20-floor building.

The vessel’s maximum load capacity is up to 18,000 containers, including 1,500 reefer containers, representing the volume of 235 Olympic pools of approximately 590,000m³.

It has a 26-member crew to operate facets, including a waste recycling system, cooking and swimming pool.

The vessel is powered by the latest generation MAN B&W 11S90ME-C9.2, electronically-controlled, two-stroke engine housed in a 78ft-long engine room. The engine is as powerful as 900 Ford Focus cars and has a thrust of 21kt, which is equivalent to that of 11 Boeing 747-400 engines.

"The vessel was officially launched and christened at Long Beach port in California in February 2016, and became the biggest container ship ever to call the US port."

The main engine is fitted with an exhaust bypass system for slow-steaming and improves energy efficiency at low loads, thus reducing the fuel consumption.

The vessel is equipped with an approved ballast water treatment system, which directly treats the ballast water when it is pumped into the vessel and again during ballasting operations. The treated water is then UV-filtered to completely remove any living organisms, preventing any foreign organisms, which in general are present in the ballast water, to enter the sea, thus protecting the marine environment.

The ship is also fitted with a fast oil recovery system, and a pollution management technology that allows hydrocarbons in the fuel bunkers to be quickly recovered without having to go through the hull.