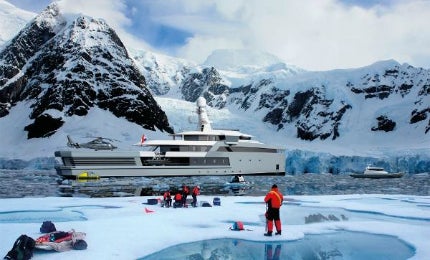 SeaXplorer 65 will be the first of the three proposed polar-class range of expedition yachts designed by Damen Shipyards. The yacht, along with the other two variants, SeaXplorer 90 and SeaXplorer 100, was launched at the Monaco Yacht Show, held in Monaco in September 2015.

The vessel will be the first purpose-built expedition yacht compliant with the new Polar Code standards, and will be capable of operating in extreme polar and tropical environments.

Damen has partnered with Eyos Expeditions, who not only contributed to the operational design of the yacht, but will also plan the expeditions on the yacht. Dutch yacht builder Amels will be responsible for sales and marketing of the expeditions.

"Passengers will have the option to choose a leading designers work for the interior of their accommodation."

The super yacht will reach even the most remote destinations, and will provide up to 40 days of luxury service to all passengers without a port of call. It is scheduled to be launched for service in 2017.

SeaXplorer 65 is based on Damen’s patented Sea Axe hull design. Designed for both ice and seaway, the vessel features a polar-class double-acting hull, and uses its stern instead of bow to break through the ice.

The hull design enables the yacht to effortlessly cut through the waves, providing minimal discomfort to passengers.

The yacht’s icebreaking performance was tested at the Hamburg Ship Model basin, where the optimised stern was tested for breaking through roughly 1m-thick first-year ice.

The ship is designed as per the International Maritime Organization’s (IMOs) polar-code standards, which from 2017 mandates that all yachts intending to explore polar regions obtain a Polar Code certificate, which would be recognised through touch IACS polar-class design and construction requirements.

According to Polar Code standards, the yacht is of Category B/first year ice to 70cm and classified by Lloyd’s register as Polar Class 6. The national authorities classified it as a Large Yacht code 3.

The SeaXplorer 65 has an overall length of 65m, moulded beam of 14m and draught of 4m, and weighs approximately 2,000 gross tonnage. It will accommodate 12 guests and 20 crew / expedition staff.

The exterior design for the vessel was provided by Azure Yacht Design and Naval Architecture. Passengers will have the option to choose a leading designers work for the interior of their accommodation.

The super yacht will comprise four decks, a lower deck, main deck, upper deck and bridge deck, plus a sun deck, which will offer a 360° panoramic view.

"The super yacht will reach even the most remote destinations, and will provide up to 40 days of luxury service to all passengers without a port of call."

The upper deck will house the owner’s area, with five guest suites, a central guest staircase, an observation lounge, outside observation deck, and a swimming pool with jet pump. It will also feature a certified helicopter deck, which can handle a helicopter with of maximum take-off weight of 4.5t, D value of 13.5m, and a helicopter lift of 12m length.

The bridge deck will feature the captain’s cabin, a large wheel house, a state-of-the-art navigation console, the whale watch guest deck, extended and enclosed bridge wings, the main salon, and the dining area.

The SeaXplorer 65 will feature a dive centre, which will include dive equipment, a wetsuit drying room, blending mixed gas facilities, and the optional added safety of a recompression chamber.

The luxury decks will provide sun beds and loungers, a swimming pool with underwater lighting, and the Sun Deck Jacuzzi. The lower deck will feature a wellness centre with a hamam, steam room, sauna with rain shower, and fully-equipped gym.

The crow’s nest is 20m above the water level, approximately the height of a seven-storey building, and will offer luxurious panoramic views.

The engine selective catalytic reduction (SCR) systems will be compliant with the new IMO Tier 3 rules. The yacht will cruise at a speed of 15kt, and will have a propulsion power of 3,500kW.

The super yacht will sail for long periods in zero-discharge mode, and will be equipped with exhaust gas soot filters to reduce environmental impact.

Waste heat will be recovered for efficient air-conditioning, heating, potable water, and pool heating. Waste will be properly managed with large holding tanks, plastics disposal, refuse separation, a glass crusher, a compactor, a cooled garbage store, and an onboard incinerator. The fuel storage tanks will be double-skinned as a precautionary measure to avoid spills.