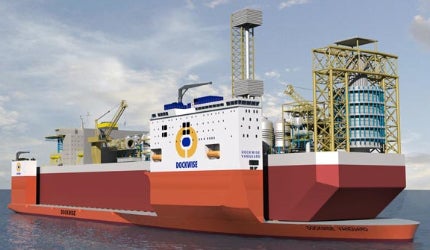 The Dockwise Vanguard has been awarded the Spotlight on New Technology Award by the Offshore Technology Conference (OTC).

In February 2011, HHI was contracted to build a new ultra-large transport vessel for Dockwise. The vessel was launched in November 2012 and was delivered in February 2013. It is currently transporting the Jack St. Malo platform hull from Korea to the US Gulf of Mexico as part of its first contract. The vessel is expected to reach the Kiewit yard at Ingleside, Texas in April 2013.

Dockwise Vanguard was also contracted to transport the Goliat FPSO to northern Norway and the Aasta Hansteen spar platform to the Norwegian Sea.

The vessel features OCTOPUS-Onboard, which is part of ABB’s Vessel Information and Control (VICO) systems suite. It also features three sensor motion measurement set up. The facilities were provided by Amarcon, which is part of ABB group. The respective contract was awarded in December 2012.

Construction of the Dockwise Vanguard SSHTV by HHI in Ulsan

"In February 2011, HHI was contracted to build a new ultra-large transport vessel for Dockwise."

The first steel was cut for the Dockwise Vanguard in September 2011. The keel laying ceremony took place in December 2011.

Large pieces of steel were manufactured at the factory and shaped, before being transported to different construction yards for assembly into blocks. The blocks were then shipped to the building dock.

The ship was built using 241 blocks and 558 sub-blocks. The first block was placed in the dry-dock at the HHI yard in February 2012. About 50 blocks were placed by March 2012. Winches were supplied by Kraaijeveld.

Dockwise Vanguard features a bow-less design developed by Dockwise and Delta Marine. The crew accommodation, including the lifeboats section, is on the starboard side of the vessel.

"The Dockwise Vanguard has been awarded the Spotlight on New Technology Award by the Offshore Technology Conference (OTC)."

The design allows the flow of water along the entire deck, but prevents the entry of water into the enclosures of the vessel.

The ship is equipped with movable casing. A bulwark is also incorporated into the design to ensure the safety of the crew. Machinery exhausts are based on the towers at the port and starboard sides at the stern.

Dockwise Vanguard has an overall length of 275m, moulded breadth of 70m, depth of 15.5m and a submerged draft of 31.5m. The deadweight of the vessel is 117,000t. The ship is provided with a free deck space of 275 x 70m. The loading deck extends the entire length of the vessel.

The ship was classified with a heavy lift vessel notation and categorised as a ‘Type 0’ vessel. The semi-submersible heavy lift ship can be ballasted down to allow the cargo to be floated aboard. The ballast tanks are then de-ballasted to raise the deck over the water surface for lifting its cargo. Dockwise Vanguard can transport large FPSO vessels, drilling rigs or heavy platforms.

The vessel is also equipped with a reduction gear system. Shipboard power is supplied by one Wartsila 6L20 auxiliary engine. The propulsion system provides a maximum speed of 14kt.

Financing the largest heavy lift vessel in the world

The investment for the vessel reached $240m which is being paid through installments. The project was financed by Dockwise through a rights offering and debt facility. Funding was secured from ABN AMRO, Royal Bank of Scotland (RBS) and the Deutsche Bank.