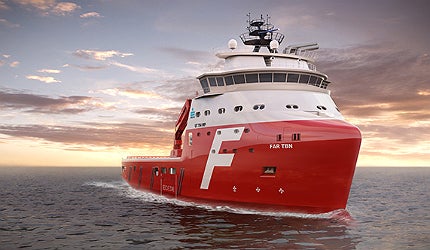 Far Solitaire is a monohull platform supply vessel (PSV) owned by Farstad Supply and managed by Farstad Shipping. The DNV-classified ship is the first PSV to be constructed as per the International Building Code – 2 (IBC – 2) regulation. This means the vessel is fit to carry dangerous and noxious liquid chemicals in bulk.

STX OSV built the Far Solitaire at its shipyard in Langsten, Norway, and delivered the vessel to Farstad Supply in October 2012. Far Solitaire was bestowed with the "Ship of the Year 2012" award at a maritime exhibition held in Hamburg just one month before the delivery.

Export Credit Norway, in cooperation with DNB Bank, GIEK and Handelsbanken, has arranged long-term finance for the vessel.

In November 2010, Farstad Shipping placed an order worth $223.8m with STX OSV for the construction of four PSVs. Far Solitaire was one of them.

Construction on the vessel was launched with a keel-laying ceremony in May 2011. The ship was launched in March 2012.

The ship’s steel hull was manufactured at STX OSV’s Romanian yard in Tulcea.

Design and features of Far Solitaire

"Far Solitaire was bestowed with the "Ship of the Year 2012" award at a maritime exhibition held in Hamburg."

Far Solitaire is of UT 754 WP ship design series developed by Rolls Royce Marine Ship Technology. She is designed to cover all the aspects of offshore oilfield services. She was developed with special focus on safe and efficient operations, reduction of fuel consumption, cutting emissions, and reducing environmental impact.

In addition to being IBC Code type – 2 compliant, the vessel boasts a number of new features. The wave-piercing bow design allows her to cut through waves. The design also adds to the vessel’s sea-keeping capabilities, improves crew comfort and safety, and cuts down on fuel consumption.

Another notable feature is the shore-to-ship power supply solution, also called cold ironing or alternative maritime power (AMP). This feature allows the vessel to make use of shore-side electrical power when berthed alongside in port.

The overall length of Far Solitaire is 91.6m and length between perpendiculars is 81.2m. Moulded breadth is 22m, while maximum draft of the vessel is 7.2m.

Dual drag-link crane on board the Far Solitaire

The PSV is provided with a new cargo rail crane system, which is normally available on anchor handling vessels. The dual drag-link crane is fitted on starboard side cargo rail so that the entire length of the cargo deck can be covered.

"The shore-to-ship power solution allows the vessel to make use of shore-side electrical power when berthed alongside in port."

The remote-controlled crane offers stable horizontal movement and can be used to perform various tasks, both offshore and onshore.

Far Solitaire is equipped with a diesel-electric power and propulsion plant that is constituted of three Bergen C25:33L9A generator sets, each rated at 2,765kW.

Propulsion is provided by two azipull 120 CP thrusters, each of 2,500kW capacity. Side thrusters include two super-silent tunnel bow thrusters and a swing up azimuth bow thruster, all rated at 883kW.

The vessel is fitted with a Class-II dynamic positioning system, which uses satellite technology to automatically position the vessel accurately even in rough sea conditions.