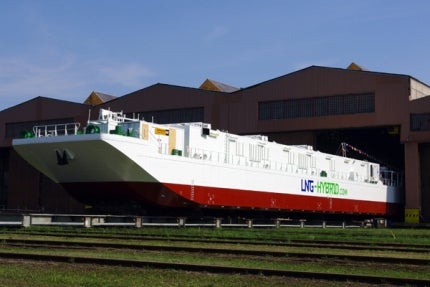 The vessel is a floating power plant providing clean and efficient cold ironing power to cruise ships. It also acts as a backup power bank to the local electric and power grid. Schramm Group will be the operator of the barge, which is based at the Hamburg port.

Becker Marine Systems partnered with AIDA Cruises in Summer 2012 under a long-term co-operation project to provide low-emission electric power to its cruise ships stationed at the Port of Hamburg, Germany. AIDAsol will be the first cruise ship to be supplied with electricity from the LNG hybrid barge at the Grasbrook pier of the German port.

The floating power supply vessel will significantly reduce harmful gas emissions, including sulphur and other soot particles, compared with conventional marine diesel fuel. This will result in reductions of nitrogen oxide and carbon dioxide emissions of up to 80% and 30%, respectively.

Shipbuilding and Machinery (SAM) of Komárno, Slovakia was contracted to build the LNG hybrid barge by Hybrid Port Energy, a wholly-owned subsidiary of Becker Marine Systems, in December 2013. Construction of the first hybrid LNG powered barge began with the keel laying ceremony, held in January this year.

The hybrid vessel was formally launched in September at the Komárno shipyard. It then sailed a distance of 1,500km, through the North Sea, as well as the Danube, Main and Rhine rivers before arriving at the Blohm+Voss shipyard in Hamburg Port where final outfitting and technical testing of the hybrid barge took place.

The barge was christened Hummel, which is a german translation of bumblebee, at a ceremony held at Grasbrook Quay in HafenCity, Germany in October. The first test connection was accomplished with the AIDAsol cruise ship during the ceremony.

The barge is expected to begin operations in spring 2015.

"The barge is also outfitted with equipment to supply heat and electricity to other ships during winter, thus improving its ecological footprint."

The Hummel, which has a maximum draught of approximately 1.7m, will be stationed in the port of Hamburg making it the first port in Europe to offer an external, environmentally friendly and low-emission power supply for cruise ships.

The barge is also outfitted with equipment to supply heat and electricity to other ships during winter, thus improving its ecological footprint.

Engine and propulsion of the Becker Marine Systems-built barge

Caterpillar Marine, through its dealer Zeppelin Power Systems, supplied five category G3516C marine gas engines in April this year. These engines, manufactured at Caterpillar’s Lafayette, Indiana manufacturing facility, are the first marine classified LNG engines to be delivered to its customer. The G3516 is a spark-ignited, gas engine certified by Bureau Veritas and is compliant with safety of life at sea (SOLAS) regulations.

Each gas-powered generator set will generate 1,550ekW at 1,500 rotations per minute (rpm). The power plant produces 7.5MW electricity at 50 / 60Hz when operating on LNG alone.