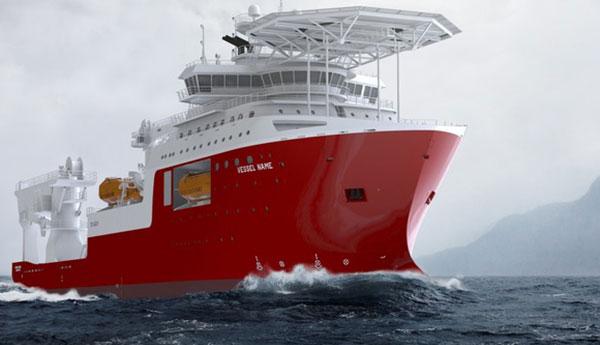 A new ST-246 dive support vessel (DSV) is being designed by Skipsteknisk for Jumeirah Offshore, a company based in Singapore. The vessel will be constructed by Huangpu Wenchong Shipyard, a subsidiary of China State Shipbuilding Corporation (CSSC).

The DSV will be fully equipped with state-of-the-art equipment to perform subsea construction works, and support inspection, repair and maintenance works of offshore and subsea installations.

Skipsteknisk was awarded a contract by Jumeirah Offshore for the design of a new dive support vessel, in September 2015. Jumeirah also contracted Huangpu Wenchong Shipyard for building the vessel. It is the seventh offshore vessel ST is designing for Asian clients since establishing office in Shanghai in June 2010. The DSV will be delivered to the owner in 2017.

The ship is one of the largest and most advanced seismic vessels in the world.

The ST-246 DSV is a mono-hull vessel with a twin-bell dive system. The bow section will feature a wheel house, while the dive support equipment will be installed between the stern and the midship section of the vessel. An elevated helicopter deck at the forward bow will support the operations of a single rotorcraft.

The ship will have an overall length of 124m and breadth of 24m, while the depth to main deck will be 10.2m. The new DP III vessel will provide accommodation for 120 personnel.

The dive support vessel will feature a 24-man saturation dive system with two diving bells. It will be equipped with two subsea cranes, with the bigger one having a lifting capacity of 250t.

The diving bells will transfer the divers between the saturation system, while the onboard equipment and systems will support operations under severe weather conditions. The DSV will be equipped with advanced control system for dynamic positioning and will also carry lifeboats to support safe operations.

The vessel will be fitted with the Rolls-Royce Icon DP3 dynamic positioning system, which will provide the ship with high manoeuvrability and station-keeping capabilities. The DP control systems utilise various information references including satellite data to mechanically control the thrusters and keep the ship in precise position, where anchoring is not feasible.

"The DP3 system from Rolls-Royce is based on an ergonomic design."

The DP3 system from Rolls-Royce is based on an ergonomic design. The bridge controls with a unified appearance and experience ensure safe operation. The control system is closely interfaced and integrated into other onboard command systems and bridge system. It can be easily installed and commissioned, and will need very few service engineers for maintenance and overhaul of thrusters and controls during the operations of the vessel.

The class III system will enable safe and reliable operations in demanding situations where any loss of position will lead to disastrous accidents, and austere pollution or damage with heavy economic effects.

The vessel will be powered by Rolls-Royce Bergen B33:45 medium-speed main diesel engines. Each engine has a rated power output of 600kW at 720rpm to 750rpm. The engines burn marine gas oil (MGO)/marine diesel oil (MDO) or heavy fuel oil (HFO).

The Bergen B33:45 engines develop 20% more power per cylinder compared to existing engines in the Bergen series. The engines comply with the Tier II and III regulations of the International Maritime Organization (IMO).

The engines offer a long life of 25,000 hours between major overhaul when running at mean loads.