Khankendi is a new subsea construction vessel (SCV) built for the Shah Deniz Stage 2 development.
The SCV was re-floated out into the Caspian Sea in May 2016.
A close view of the bow section of Khankendi SCV.
The Khankendi SCV features a DP3-class dynamic positioning (DP) system. Image courtesy of Baku Shipyard. 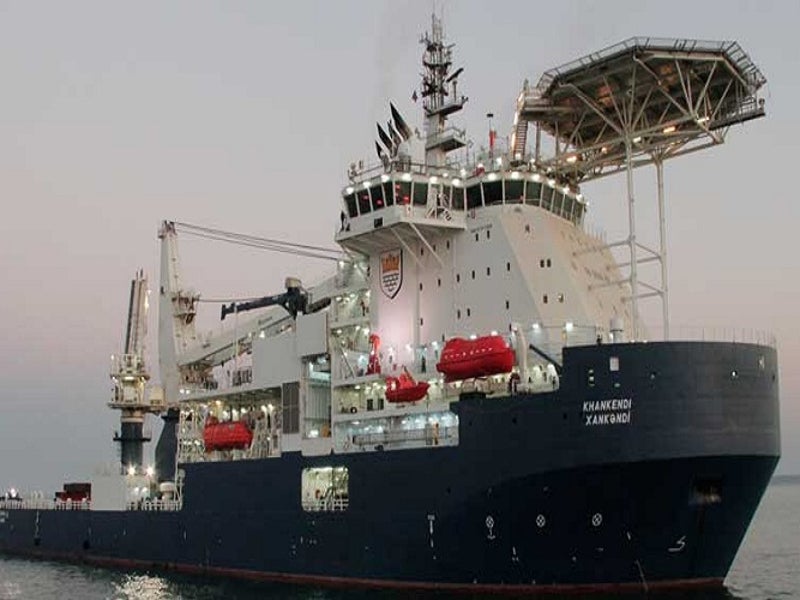 Khankendi is a new subsea construction vessel (SCV) built for the Shah Deniz consortium. It was designed by Marine Technology Development, a part of Keppel Offshore & Marine (Keppel O&M).

The SCV is being deployed for the Stage 2 development of the Shah Deniz field, operated by BP Exploration (Shah Deniz), in the South of the Caspian Sea, approximately 70km off the coast of Baku, Azerbaijan.

In April 2014, Baku Shipyard was awarded a $378m contract by BP Exploration (Shah Deniz) to design and build a new SCV. Keppel Singmarine was contracted by Baku Shipyard for fabrication and outfitting of the vessel, which was launched and delivered in September 2017.

It is intended to transport and install deep-water subsea production equipment and subsea structures at the field. It will be stationed at the field for a term of 11 years from 2017 to 2027.

SCV Khankendi was constructed at Keppel Singmarine’s Singapore shipyard and Baku Shipyard in Azerbaijan. Two hull sections of the vessel were built in Singapore and were transported to Baku for final assembly with the accommodation block.

Construction began with the first steel cut at Keppel Singmarine shipyard in Singapore, in June 2014. The hull of the SCV was launched in August 2015 and shipped to Baku Shipyard in September 2015 for final outfitting with other components. The vessel was floated out by Baku Shipyard in May 2016.

“In April 2014, Baku Shipyard was awarded a $378m contract by BP Exploration (Shah Deniz) to design and build a new SCV.”

The SCV underwent a six-week trial programme in the Caspian Sea, which evaluated the functionality of engine and propulsion systems, dynamic positioning, navigation systems, and acoustics and offshore capabilities. The trial programme was concluded in August 2017.

The unique vessel was built according to the DNV GL classification rules and regulations. It has an overall length of 155m, moulded breadth of 32m, moulded depth of 13m and a summer draught of 7.5m.

The Khankendi SCV is equipped with a DP3-class dynamic positioning (DP) system, which allows the vessel to uphold its position and heading through advanced positioning and control systems. The DP system also enables the vessel to work in conditions with maximum significant wave height of 3.5m.

The deck is installed with a 900t main crane with a capacity to place 750t subsea structures at a maximum water depth of 600m. The two-bell diving system aboard the vessel is capable of transporting 18 personnel to conduct underwater works.

The vessel also carries two work-class remotely operated vehicles (ROVs) and a moon pool. The state-of-the-art equipment and systems aboard the vessel allow it to perform complex deep-water subsea works without the need for anchors.

The forward bow deck is installed with an elevated landing platform for supporting the operations of a single helicopter. The vessel is also equipped with a heating, ventilation, air-conditioning (HVAC) and provision cooling plant supplied by Heinen & Hopman Singapore and Heinen & Hopman Turkey.

Accommodation aboard the subsea construction vessel

The vessel has a capacity to complement up to 175 personnel, including the crew, technicians and specialists. The accommodation units are classified into 63 single and 56 double cabins.

The two engine rooms aboard the vessel are equipped with six 4.4MW and two 3.2MW generators. The power plant generates a total electric power output of 31,600kW.