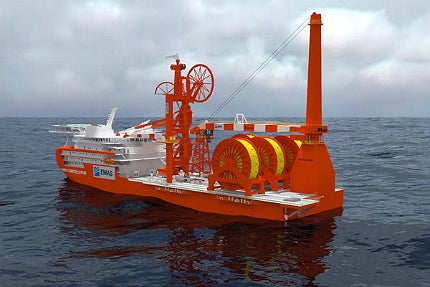 EMAS AMC’s Lewek Constellation is a multilay offshore construction vessel with ultra deepwater pipelaying and lifting capabilities.
The vessel was delivered in late 2013 and christened officially in March 2015. It was built by Sofel in Vung Tau, Vietnam.

The vessel served VAALCO Gabon to carry out operations at its Etame Marin Field located offshore of Gabon in West Africa. The vessel joined EMAS AMC’s Lewek Express pipelayer, to carry out offshore works for VAALCO under a contract worth $120m.

"The vessel served VAALCO Gabon to carry out operations at its Etame Marin Field located offshore of Gabon in West Africa."

The vessel has a deck area of 4,200m² minus the reels and possesses deck strength of 10t for each square metre
It is equipped with a K-POS (Kongsberg Maritime) DP3 system integrated with position reference and environmental sensor systems.

Optional features aboard the pipelay and construction vessel

Lewek Constellation features two 150HP Shilling HD work class remotely operated vehicle (ROV) systems capable of being launched from ROV hangars with dedicated moonpools. An RAPP Hydema launch and recovery system (LARS) is featured inside the ROV hangars, which is capable of operating at a water depth of 4,000m.

The equipment also includes an abandonment and recovery system (A & R system) comprising of two 600t each traction winches, along with a steel wire rope storage capacity of 4,000m with future J-Lay option.

The thrusters were provided by Rolls Royce. The vessel has a transit speed of 12.5kt.