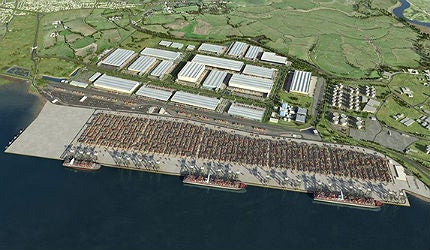 London Gateway Port Terminal is an automated deep-sea container port developed by DP World on the north bank of the River Thames in Essex.

The two facilities were built on the site of a former Shell oil refinery in Essex. Construction work on the £1.5bn ($2.43bn) terminal project began in 2010. It was privately financed by DP World. The two facilities together have generated approximately 12,000 direct jobs and more than 20,000 indirect jobs.

The new terminal commenced operations in November 2013 and is capable of handling 3.5 million teu annually and accommodating the largest cargo vessels in the world.

The project will cut the movement of 2,000 trucks on the national highways on a daily basis and reduce the shipping time of containers compared to the existing ports in England.

The strategic collocation of the terminal and the logistics park allows the London Gateway to become a major commercial hub in the near future.

The project is located just 25 miles away from central London with close proximity to the towns of Thurrock, Basildon, and Southend-on-Sea. The site also provides easy access to the south east of England. Almost 50% of the consumers in the UK are based in London and the south east.

Facilities of the deep-sea container port

The terminal, built over an area of 175ha, has a quay length of 2,700m with 24 quay cranes in operation, and comprises of six berths.

With a berth depth of 17m, the new terminal is built to accommodate cargo vessels of up to 18,000teu.

The new terminal is equipped with the latest Navis SPARCS N4 terminal operating system (TOS). The SPARCS N4 system with automated container handling equipment is used for automating the processes at the main gate, the container yard and also at the rail terminal connecting the London Gateway Project site.

The terminal is also equipped with the latest facilities for safety, time-saving and cost-efficiency. The facilities will include advanced vehicle booking systems (VBS), automated optical character recognition (OCR) for the road gate system, automatic stacking of cranes (ASC) using OCR, and light barriers for offloading and back-loading road vehicles.

A rail terminal is also built near the port by Balfour Beatty, in a separate project. DB Schenker Rail UK operated the first intermodal train from the port terminal.

The logistics park covers an area of 227ha, out of which approxmiately 9.25 million square feet (86ha) is used to accommodate B8 warehousing, research, and service facilities such as retail and hotel.

"The project is located just 25 miles away from central London with close proximity to the towns of Thurrock, Basildon, and Southend-on-Sea."

Navis, which is a subsidiary of Cargotec, supplied the terminal operating solution (TOS) for the London Gateway. Cargotec was also contracted in 2011 to supply 40 Kalmar automatic stacking cranes and 28 Kalmar shuttle carriers.

The Port of London Authority (PLA) provided services such as diving, salvage and hydrographic surveys, monitoring of licenses, and tidal works approval for the project.

The high energy impact compaction (HEIC) works were carried out by LANDPAC.

The transportation and environmental engineering services were provided by AECOM. The company also carried out the environmental impact assessment for the project.

Part of the construction work of the terminal was contracted to the joint venture of Laing O’Rourke and Dredging International.