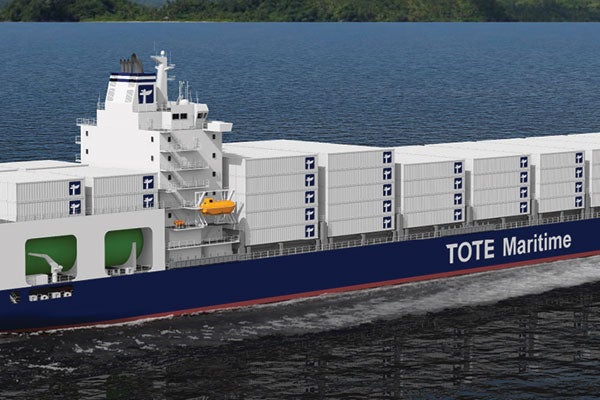 The Maritime Administration (MARAD) sanctioned a $324.6m loan guarantee to TOTE and its parent company Saltchuk Resources for the construction of the Marlin Class vessels in September 2014.

The two vessels are operated by Sea Star Line under a charter agreement signed in October 2014. They serve the Puerto Rico trade, while operating between Jacksonville and Florida, US, as well as San Juan in Puerto Rico.

General Dynamics NASSCO commenced construction of the first Marlin-class vessel with a steel-cutting ceremony in February 2014, which took place at NASSCO’s shipyard in San Diego.

The first vessel, Isla Bella, was launched in April 2015. The second vessel, Perla del Caribe, was christened and launched in August 2015.

The first vessel entered into service in October 2015, while its sister vessel was delivered in January 2016.

WesPac Midstream and Pivotal acquired land to build a new natural gas liquefaction bunker facility in Jacksonville, Florida, in mid-2016 to meet the LNG fuel requirements of the south-east.

The Marlin-class ships are designed to burn either fuel oil, or gas, derived from LNG, thereby significantly decreasing gaseous emissions and increasing fuel efficiency, when compared with conventionally powered ships.

The ships are also outfitted with two Cryos manufactured stainless-steel cryogenic tanks of 380t each. The massive tanks store 900m³ of LNG onboard the ships.

TOTE’s Marlin-class vessels are equipped with a dual-fuel, slow-speed 8L70ME-C8.2-GI engine, built by Doosan Engine under licence from MAN Diesel and Turbo.

“The Marlin-class vessels are expected to be the world’s safest and cleanest container ships.”

The engine was delivered to US General Dynamics’ NASSCO’s Shipyard in July 2014 and the engines underwent factory acceptance tests, in compliance with US regulations and restrictions, prior to delivery.

The Marlin-class vessels are considered to be the world’s safest and cleanest container ships.

The ME-GI engine has the option of using either heavy fuel oil (HFO) or gas as fuel. The MAN Diesel and Turbo engine package, including turbochargers, has no methane slip and ensures low emissions, making the ships more environment-friendly.

The propulsion equipment on-board enables the vessel to sail at a target operating speed of 22kt.