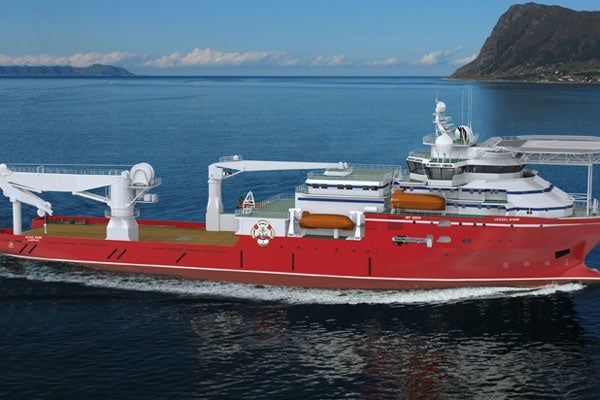 The MT 6024 is a multi-purpose subsea diving support and construction vessel (DSCV) being built for Thailand-based Mermaid Offshore Services, a subsidiary of the Mermaid Maritime Public Company.

The vessel is being built by China Merchants Industry Holdings (CMHI) in China, with construction commencing in January. It was launched in February 2016 and delivery of the first vessel is scheduled for mid-2017. The second vessel is planned for delivery by the end of 2017, while the third will be delivered by mid-2018.

Designed by Marin Teknikk, the MT 6024 DSCV will be outfitted to operate worldwide. The vessel is being built at Keppel Singmarine’s shipyard in Singapore.

CMHI is also building another vessel of the same design for Singapore’s Kreuz Subsea Marine.

The gross and net tonnage capacities of the multi-purpose subsea vessel will be 11,100t and 3,400t respectively, with the deadweight approximately weighing 7,000t.

The main deck of the vessel will cover an area of approximately 1,300m² and will feature removable bulwarks on each side, with a deck strength of 10t/m². The vessel will also feature an ROV deck of 240m² and a bridge deck of 250m² offering maximum loading capacities of 6.5t/m² and 1t/m² respectively.

The MT 6024 DSCV will be outfitted for Mermaid to accommodate 130 personnel in 28 single-bed cabins and 51 double-bed cabins with full air-conditioning and TV/satellite service.

"The MT 6024 DSCV will be outfitted for Mermaid to accommodate 130 personnel in 28 single-bed cabins and 51 double-bed cabins with full air-conditioning and TV/Satellite service."

The Tween deck will have a diving workshop, switchboard room and a diving store.

The Shelter deck will feature a mess room with seating arrangements for 56 crew members plus 16 officers. Other facilities will include an ROV control room, dive control room, reception, provision, galley, rest room for galley personnel, conference room, TV room and an internet cafe.

Above the wheelhouse, the bridge deck will have designated space for three offices, a sky-lobby, reception and a TV room. The Captain deck will feature offices for senior clients, clients and field engineers, as well as an office of information management (OIM) and a survey office.

The subsea vessel will be equipped with a 140t main crane with a maximum outreach of 12m. It will be provided with an active heave compensated (AHC) winch to provide access to depths up to 3,000m with a safe working load of 25t at a 35m outreach. The DSCV vessel will also be fitted with a 40t auxiliary crane with wire capacity to negotiate a maximum depth of 600m. The vessel will also contain a foldable crane and four off-air driven tugger winches with a hosting capacity of 5t.

The MT 6024 DSCV will be outfitted with a twin three-bell saturation dive system to carry out subsea diving operations up to 300m below. The SAT dive system will have a provision to accommodate 18 men in its three main chambers.

"The subsea dive support and construction vessel will have two 3.9m² moon pools with damping zones for the twin-bell SAT dive system."

The subsea dive support and construction vessel will have two 3.9m² moon pools with damping zones for the twin-bell SAT dive system; a 5m-long and 5m-wide moon pool will also feature. The vessel will also have two 110m² cargo holds, one at the lower aft on the tank top, and another at the Tween deck.

Two passive roll-reduction tanks will be fitted at the aft. A medium-sized observation class ROV, and a work-class ROV will be placed on the dive area of the forecastle deck.

An aluminium helicopter deck will be constructed to accommodate a Sikorsky S-92 or a S61N helicopter, which will comply with HELDK-SH, IMO and UK Civil Aviation Authority (CAP) 437 regulations.

"Navigation equipment on-board the vessel will include a fully equipped radar plant, a survey gyro compass, direction finder and a current meter."

Navigation equipment on-board the vessel will include a fully equipped radar plant, a survey gyro compass, direction finder and a current meter.

Engine and propulsion of the multi-purpose subsea DSCV

The MT 6024 DSCV will be powered by a diesel-electric frequency-controlled propulsion system, equipped with five 2,851ekW main engines and one 910ekW harbour generator; an emergency generator of 910ekW will also be installed.

The propulsion system will enable the vessel to attain a maximum speed of 15k, with an endurance of 90 days on fuel and 60 days on gas.