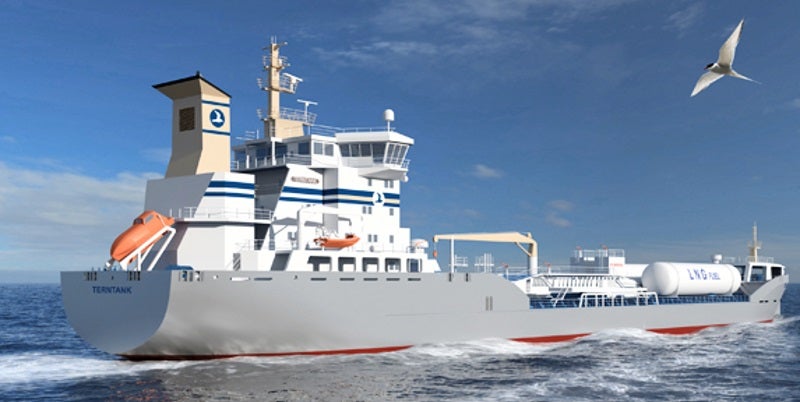 M/T Ternsund is a dual-fuelled (LNG and diesel) chemical tanker constructed by Avic Dingheng Shipbuilding, for Terntank Rederi. The vessel is being chartered by North European Oil Trade (NEOT).

M/T Ternsund is the first of four sister vessels ordered by Terntank Rederi from Avic Dingheng Shipbuilding. The second vessel named M/T Ternfjord is expected to be delivered in 2016, while the remaining two vessels will be delivered in 2017.

Compared to other conventional tankers, M/T Ternsund, running on LNG, is capable of reducing sulphur oxide (SOx) emissions by 99%, nitrogen oxide (NOx) emissions by approximately 97% particulate matter by more than 99%, and CO2 emissions by 40%.

M/T Ternfjord design and facilities onboard

The design of the twin-hull chemical tanker is based on Rolls Royce Marine’s Type NVC 615 CT. The vessel has an overall length of 147m, moulded breadth of 22m, moulded depth of 11.70m, draught of 9m, deadweight capacity of 15,000t, and a gross tonnage capacity of 11,374GRT.

The vessel’s cargo alarm and monitoring systems include a Kongsberg tank radar, a K-Chief 600 alarm, an operator station-OS, and a Kockumation loading computer.

Its deepwell cargo pumps are of the DW 200/250 multi-suction type, which are frequency controlled and have a rated capacity of 450m³/h at 120 metre liquid column (mlc).

The tanker’s 3,950m³/h inert gas system uses an existing dedicated thermal oil heater incorporating a burner, which is capable of generating inert gas. The vessel is also equipped with a nitrogen generator with a capacity of approximately 100Nm³/h at 96%.

It is further equipped with Panasia’s proprietary GloEn-Patrol ballast water management system (BWMS), which incorporates both filter and ultraviolet units with a treatment capacity of 1,200m³/h.

The two-stroke five-cylinder engine has a maximum power rating of 5,850kW at 102 revolutions per minute (rpm).

The engine was developed as part of the Joint Industry Project Into The Future – Baltic SO2lution, a collaboration formed between Terntank, Wärtsilä, North European Oil Trade (NEOT) and Wega Enviro to introduce a new two-stroke dual-fuel engine and to reduce air emissions from vessels carrying petroleum products in the Baltic Sea.

The engine drives a single propeller, providing the vessel a designed speed of 14.5k. The vessel is also equipped with three Mitsubishi MAS 850-S auxiliary diesel generator sets with a rated capacity of 790kWe at 1,800rpm.

Skangass supplies the LNG fuel for the vessel through its Coral Anthelia LNG-bunker vessel. The vessel’s shaft generator was supplied by We Tech Solutions.

The cooling of the two LNG tanks following the vessel’s maiden voyage was performed by Linde Group and its Belgian partner AQ at the port of Rotterdam.