The MTS Argonon chemical tanker is built as per the regulations of Central Commission for the Navigation on the Rhine (CCNR).
The 6,100dwt chemical tanker, owned by Deen Shipping, is 110m long.
Deen Shipping owns Argonon and Amphiro, a bunkering vessel.
MTS Argonon was built by Shipyard Trico and is operated by Argonon Shipping.
In addition to two lines of bunker mast, the ship is fitted with two load and unload pipes.
The LNG storage tank and gas processing equipment are located on the main deck.
The vessel's main engines are designed to burn LNG and diesel at a ratio of 80:20. 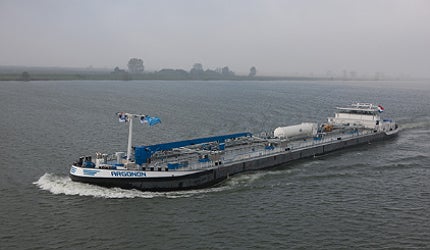 MTS Argonon is a dual-fuel driven chemical tanker owned by Deen Shipping and operated by its subsidiary, Argonon Shipping. She was delivered in December 2011 and is reportedly the first new-built tanker in the world to sail on liquefied natural gas (LNG). The vessel is designed to run on LNG and diesel in the ratio of 80:20.

The keel of MTS Argonon was laid in 2009 and the hull construction was finished in 2010. The ship’s outfitting was commenced in May 2011 in the Port of Rotterdam.

Contractors and suppliers involved in the construction of MTS Argonon

"MTS Argonon is reportedly the first new-built tanker in the world to sail on liquefied natural gas (LNG)."

Several subcontractors had worked together in close collaboration to build the innovative chemical tanker. The Dutch shipbuilder, Shipyard Trico was the main contractor. The ship’s hull was manufactured in Nanjing, China, by Sainty Marine Shipyard.

LNG-associated pipes were installed by Trico Piping, a wholly owned subsidiary of Shipyard Trico. Dual-fuel propulsion engines were supplied by Pon Power, the official dealer for Caterpillar engines in the Netherlands. Lloyd’s Register was the classification agency.

The most important feature of the 6,100dwt chemical tanker is her capability to run on dual fuels, LNG and diesel. This significantly reduces the emissions of carbon dioxide and nitrogen oxides. The dual-fuel application also helps to reduce emissions of particulate matter to almost zero. It can further contribute to considerable savings in the long run as LNG is cheaper than diesel.

Another innovative feature of the vessel is her Y-shaped double hull construction. This unique hull shape minimises the risk of fatal collision.

The length of the vessel is 110m and width is 16.2m. The draft is 4.95m. The chemical tanker is fitted with two loading and unloading pipes. In addition, there are two lines of bunker mast.

The LNG storage tank and gas handling equipment are installed on the main deck at the middle of the ship. This area, situated above the cargo tank, is specified as a gas dangerous zone.

"Another innovative feature of the vessel is her Y-shaped double hull construction."

The LNG tanks are designed and fabricated as per the EU Pressure Equipment Directive (PED). They are made of vacuum insulated stainless steel with two walls. Vacuum insulation is provided to get rid of excessive warming and boil off of the stored LNG.

The entire piping connections to the primary or inner tank are put up inside the boundary of the outer tank. The outer tank functions as an additional barrier in case of the failure of the primary tank or pipe work.

The pipes coming out of the boundary of the outer tank are placed inside a cold box, which is fixed to the outer tank boundary. The cold box also has a pressure build-up regulator and gas processing equipment.

Power and propulsion system of the Argonon chemical tanker

The Caterpillar dual-fuel engines use natural gas as the primary fuel and diesel as ignition fuel. The LNG first passes through a vaporiser where it is heated up by hot water and converted into gas.

The produced gas is mixed with combustion air to form a homogeneous mixture. The resultant mixture, together with diesel fuel, is fed into the combustion chamber by a turbocharger. Finally, the diesel ignites the mixture of air and gas.

The hot exhaust gas produced by the turbines is captured through a heat exchanger that heats up the water to a temperature of 80°C-90°C. This hot water is used as a coolant to vaporise the LNG as well as to provide heat for the boiler and domestic hot water system.