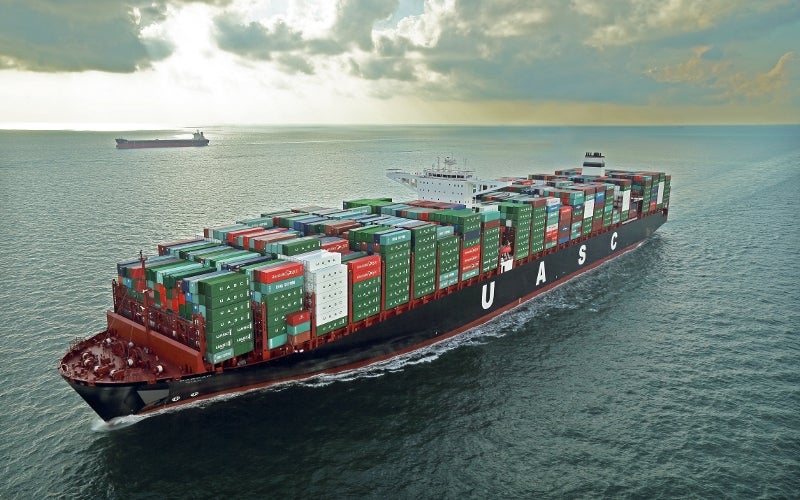 Classified by DNV GL, the vessels are the first to receive DNV GL’s new gas ready notation. The keel laying ceremony of Al Nefud was held in June 2015 and the vessel was delivered in November 2015. The ship made its maiden voyage in February 2016.

The vessel serves the Asia-Europe Container Service 1 (AEC1) ship trade route covering Qingdao, Shanghai, Ningbo and Yantian ports in China, Port Kelang in Malaysia, Felixstowe port in the UK, Port of Rotterdam in the Netherlands and Port of Hamburg in Germany.

The cargo container vessel features an optimised hull form and super structure design. It is 400m long and 58m wide, and has a draft of 16m. Deadweight and gross tonnage of the vessel are 206,418t and 195,636t respectively.

The vessel has a reefer capacity of 1,000t containers. The LNG tank of the vessel has been placed between the longitudinal hold bulkheads, while maintaining a distance between the outside insulation of the tank to the shell of B/10.

Tank connection space, the fuel gas supply rooms and the LNG bunk stations have been placed above the tank. The ballast tank capacity of the container vessel is 50,793m³.

Propulsion system on the Al Nefud

A Cummins diesel engine generator aboard the Al-Nefud serves as an emergency gen set. The vessel is propelled by a mono-block propeller from Hyundai and two Kawasaki bow thrusters.

An energy efficient integrated system has been installed on the vessel for monitoring and optimising the propulsion system and machinery operations. As a result, the energy efficiency design index (EEDI) value of the vessel is 50% lesser than the limit set by the IMO.

The vessel includes a shore-to-ship power supply solution for zero emissions at berth and has been designed to emit the lowest per container CO2 levels in the industry. CO2 output per TEU is more than 60% lesser in comparison with the 13,500TEU vessels.

TECHNOLOG Consultants were responsible for designing UASC’s A19-class ships with energy efficient features. The LNG plant design for the vessel was approved by DNV GL.