NB 508 Baltika is the world’s first oblique icebreaking multipurpose emergency and rescue vessel.
The final outfitting of the Baltika vessel took place at Arctech Helsinki Shipyard in Finland.
The Baltika vessel is built with a new asymmetric hull which allows it to cut through ice obliquely.
The Russian icebreaker Baltika is fitted with Metso DNA information system. 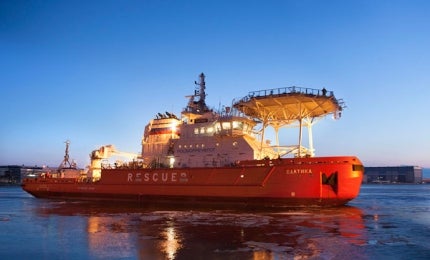 Baltika, also referred to as NB 508, is the world’s first oblique icebreaking multi-purpose emergency and rescue vessel being built at Arctech Helsinki Shipyard in Finland, for the Russian Federal Agency of Sea and River Transport.

Arctech Helsinki Shipyard and Yantar JSC received a €76m contract to jointly build the NB 508 vessel in December 2011. The first steel was cut at Yantar Shipyard in April 2012 and the keel was laid in July 2012.

The Baltika’s hull blocks were built by United Shipbuilding Corporation’s Yantar Shipyard and the assembly and final outfitting of the vessel were completed at Arctech shipyard in Helsinki.

The vessel was launched in December 2013 and her sea trials were successfully concluded in March this year. NB 508 is scheduled to be delivered to its owner in the second-half of this year and will be deployed in icebreaking, rescue and oil spill combat operations in the Gulf of Finland.

The ship will be operated by FGI Gosmorspassluzhba, the Russian Marine Emergency Rescue Service.

The Russian ice-breaker was designed by Aker Arctic Technology, based on the ARC 100 concept. The overall length of the vessel is 76.4m, while its load waterline length (LWL) and maximum breadth are 72.1m and 20.5m respectively.

Baltika’s deadweight at maximum draft is approximately 1,150t and gross tonnage capacity is 3,800t. The vessel has a maximum hull draft of 6.3m and a deck area of 380m².

The completed vessel will have the capacity to provide accommodation for 24 crew members and an additional 12 special personnel.

The NB 508 vessel is outfitted to perform icebreaking rescue and emergency salvage operations in harbours and nearby water areas, and in environmental monitoring missions. The hull is designed to be able to move ahead and astern through 1m thick ice at a speed of 3k. The Baltika is the first vessel designed to break ice obliquely; the oblique mode allows the vessel to create a 50m wide channel in 0.6m thick ice, which is over two times wider than her breadth.

"The Baltika is the first vessel designed to break ice obliquely; the oblique mode allows the vessel to create a 50m wide channel in 0.6m thick ice."

The ship will provide support and assistance to distressed vessels and floating facilities within the range of 4,500nmi and can tow them to safe harbours.

The vessel is fitted with special equipments to clear oil and petroleum spills. NB 508’s asymmetric hull and multiple propellers allow her to operate forward and backwards as well as obliquely (sideways) with a large angle of attack (AOA). The vertical side of the hull will be used as a sweep arm when moving obliquely through oil slick and the oily water will be pumped into a skimmer tank through a hatch in the hull; the skimmer tank has brush collectors to separate the oil from water.

Baltika also features a sophisticated built-in oil recovery system, which is designed to function even in heavy waves. The safety equipments on-board the vessel include fire extinguishing systems to combat external fires and one workboat for oil boom handling.

The vessel also features a helideck suitable for handling a Ka-32 helicopter and the ship also has a knuckle boom type offshore crane installed on the cargo deck, which has a lifting capacity of 25t and can move loads, handle the workboat and carry out oil spill response functions.

Contractors and suppliers involved with the Baltika build

"The oblique icebreaking rescue and emergency vessel is capable of cruising at a maximum speed of 14k."

Metso supplied the integrated automation system for the vessel, which manages the alarm, monitoring and control systems of the machinery and cargo systems. The automation system is also equipped with LCD touch panels to contain unattended machinery sailing (UMS) mode alarm announcements and a dead man alarm system.

The Baltika NB 508 vessel is powered by a diesel-electric propulsion system comprising of three main diesel generator sets, which can operate using low suplhur fuel, with a total installed capacity of 9MW. The total propulsion power of the vessel is 7.5MW.

The oblique icebreaking rescue and emergency vessel is capable of cruising at a maximum speed of 14k.