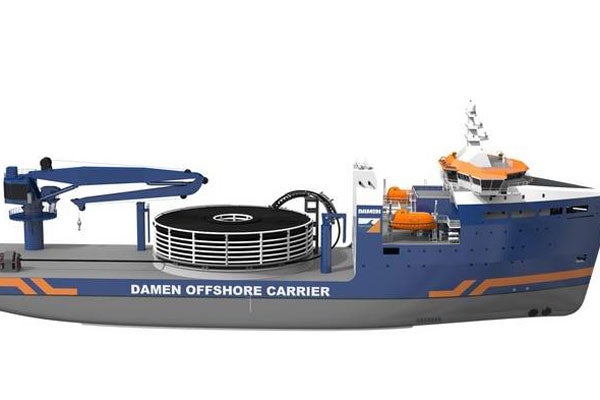 Damen Shipyards signed a contract with Van Oord for the construction of the cable-laying vessel in October 2013. The vessel was launched in June and delivered to Van Oord in December 2014. The cable-laying ship began operations in March 2015.

Nexus is being deployed to install electrical cables at the Gemini wind farm in the Dutch waters of the North Sea. Van Oord installed additional cable-laying equipment on the vessel at Damen Shiprepair Vlissingen.

Design and features of the electrical cable laying vessel

The Nexus cable-laying vessel is based on the Damen Offshore Carrier 7500 design. It is a new multifunctional concept, which provides a spacious deck for supporting heavy transport, roll-on / roll-off (RoRo) transport and offshore installations. The basic design can be customised for installing dedicated equipment suitable for cable-laying missions.

Nexus is equipped with a DP Class 2 dynamic positioning system and a cable carousel, which has a capacity of more than 5,000t, and is designed for safe and secure installation of large diameter cables under the sea.

The vessel’s on-board tank capacities ensure the storage of up to 1,678m³ of fuel oil and 187m³ of fresh water.

The Damen Shipyards-built vessel is also equipped with an auxiliary crane to lift up to 14t at an outreach of 9m.

Engine and propulsion of the Nexus cable laying vessel

"The Nexus cable-laying vessel is based on the Damen Offshore Carrier 7500 design."

Van Oord received an engineering, procurement and construction (EPC) contract worth more than €1.3bn from Northland Power for the construction of the 600MW Gemini offshore wind park in May 2014. The wind farm site is located approximately 55km north of the West Frisian Island of Schiermonnikoog, Netherlands.

As the balance-of-plant contractor, Van Oord is responsible for the engineering, procurement and construction of the wind farm, along with building the onshore high-voltage station, two offshore substations and all the cable laying works.

The vessel was deployed along with Van Oord’s newly built jack-up vessel Aeolus. Nexus lays export cables for connecting the wind farm to the onshore power grid owned by TenneT. It also inter-connects the inner array cables between the turbines.

Heinen & Hopman was awarded a contract to supply HVAC systems for the cable laying vessel. Alewijnse Marine Systems was contracted for the installation of electrical systems on Nexus.