Pacific Champion is an anchor handling tug supply (AHTS) vessel owned and managed Swire Pacific Offshore.
The vessel was delivered in March 2011.
At 100% MCR, the vessel can cruise at a speed of 15.3kts. 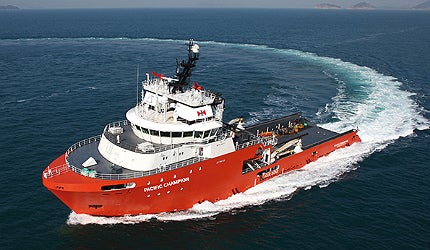 Pacific Champion is the newest anchor handling tug supply (AHTS) vessel in the fleet of Swire Pacific Offshore. She is capable of undertaking a variety of offshore operations, especially in rough and deep water conditions. She was delivered in March 2011.

Built to DNV’s Ice C Class and Comfort (V3) notations, the vessel has the capacity to pull the largest vessels in the world. She is enhanced with capabilities such as dynamic positioning (DP class 2), oil recovery and fire-fighting (Fi-Fi II).

The vessel is owned and managed by Swire Pacific Offshore, a wholly owned subsidiary of Swire Pacific, and was built by Sekwang Heavy Industries in Ulsan, South Korea.

"Pacific Champion is capable of undertaking a variety of offshore operations, especially in rough and deep water conditions."

Pacific Champion is of UT786 CD design, which was developed by Rolls-Royce. More than 500 offshore vessels of UT series have already been built since its inception in the 1970s.

The vessel was designed for offshore operations in North Sea conditions and built to full class rules supervised by DNV. The main deck (excluding the aft area) is wood sheathed. The aft area is steel plated for anchor handling.

The vessel is fitted with two passive roll reducing tanks and features a pneumatic bulk handling system that can simultaneously release two types of dry bulk via two individual discharge lines. The continuous bollard pull capacity of the vessel is 190t and the maximum capacity is 205t.

Environmental features include a sewage treatment plant, an oily water separator with 15ppm monitor, ballast treatment system, and a galley macerator. The stern roller is fitted with a freshwater lubrication system. The centre mud tanks, fitted with agitators, are of free flowing design.

The contract for the construction of the vessel was signed in May 2007. The keel was laid in October 2009 and the vessel was launched in March 2010. The naming ceremony was held on 11 March 2011 in Hong Kong.

Accommodation and facilities onboard the vessel

The vessel can accommodate a total of 35 people and is equipped with air conditioning and heating facilities. Berths on board include seven single, ten single/double and four double berths. Temporary reception for up to 280 survivors can also be arranged.

Onboard facilities include a lounge, office, conference room, gymnasium, and a hospital / treatment room. Survey space is available in the wheelhouse.

It can discharge fuel oil, potable water, ballast water and drill water at the rate of 200m3 per hour. The discharge rate of brine and liquid mud is 75m3 per hour. For dry bulk, the rate is 26m3 per hour.

Pacific Champion is equipped with two RRM Bergen B32L40V12P CD diesel engines, which can produce 12,000kW of power in total. The vessel also has three auxiliary generators, including two 910kW generators and one 425kW generator. Two shaft alternators, each of 3,000kVA, are fitted for achieving fuel economy.

"Environmental features include a sewage treatment plant, an oily water separator, a ballast treatment system, and a galley macerator."

For smooth manoeuvring, the vessel is equipped with four side thrusters, two of which are stern thrusters. The third one is a bow thruster of 883kW and the fourth one is an azimuth thruster of 1,500kW.