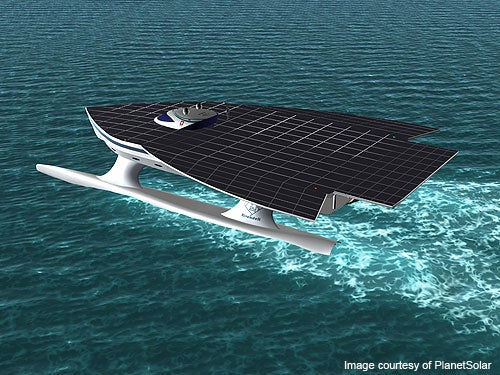 The PlanetSolar is a solar-powered vessel built by Knierim Yachtbau, in Kiel, Germany for Switzerland-based PlanetSolar.

It is the biggest solar boat ever built. The solar powered craft is topped by a large array of photovoltaic panels.

The boat is designed to circumnavigate the world. It became the first multi-hull vessel to sail around the world using solar energy.

The boat sailed from Marseilles and crossed the Atlantic Ocean, the Panama Canal, the Pacific Ocean, the Indian Ocean and the Suez Canal to join the Mediterranean.

PlanetSolar was christened and launched in March 2010. The solar boat made its first voyage off Kiel in April 2010.

It was stationed in the waters of the Baltic Sea to complete a test phase during 2013. The test was conducted by the University of Geneva (UNIGE) from June 2013 to August 2013.

“It is the biggest solar boat ever built. The solar powered craft is topped by a large array of photovoltaic panels.”

The deadweight of the boat is 85t. It can sail at a maximum speed of 14kt. The boat can accommodate four crew and up to 60 personnel on its world voyage.

The solar generator can produce peak power of 93.5kW. The efficiency is estimated at 18.8%.

The top of the boat is surfaced with 127 photovoltaic modules covering 537m². The power generated by the modules is stored in Lithium Ion (NCA) batteries. The 648 cells installed in the boat weigh about 11t.

The board battery banks have an efficiency of over 95% and deliver electricity to the electric motors in each demi-hull.

Construction of the solar-powered vessel

Swiss Rivendell Holding funded the construction of the boat amounting to €12.5m. The construction began in January 2009 at the shipyard Knierim Yachtbau in Kiel and took 14 months to complete.

“PlanetSolar was christened and launched in March 2010. The solar boat made its first voyage off Kiel in April 2010.”

Around 100 personnel were involved in the shipbuilding. The boat is made of carbon-fibre epoxy sandwich materials.

About 20.6t of steel, 11.5t of sandwich core and 23t of Epoxy Resin and Hardener are used in the construction.

The project is supported by the French Ministry of Ecology, Energy, Sustainable Development and Land Settlement.

The photovoltaic modules are supplied by the Immo Ströher. Autodesk provided the technology to create 2D and 3D plans of the boat.

Performance of the Swiss vessel

The displacement during the circumnavigation will be 65t, further it will be increased to a displacement of 85t to serve as a luxury yacht.

Propulsion of the biggest solar boat ever built

Four motors develop a total power output of up to 176kW (239bhp), of which about 20kW per hour is consumed at cruising speed.

The backup power is utilised at night and during rains. The advanced lithium-ion batteries can store up to 1.3MW of solar energy under deck.

The boat is equipped with a rudderless steering system. Each propeller supplied by AIR has a diameter of 2m and rotates at a maximum speed of 160rpm.

Lottie Holly is a new mussel dredger commissioned by its owner Myti Mussels in September 2013.