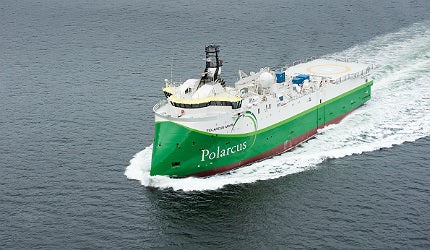 The vessel is also the first of two 12-14 streamer Arctic-ready 3D seismic vessels built by Ulstein Verft, the second vessel being the Polarcus Adira which was delivered in June 2012.

The vessel measures 92m in length and has a molded breadth of 21m. The length between the perpendiculars is 84.96m and the depth to the main deck is 9m. The maximum draught is 7.5m and the design draught is 6.5m.

Polarcus Amani is designed with a gross tonnage capacity of 7,709t, a deadweight capacity of 4,472t, and a maximum bollard pull of 125t.

The X-BOW hull line design, which is a backward-sloping bow that starts at the extreme front of the vessel, provides a continuous and sharp bow shape. The design enables the vessel to respond to large waves and maintain high speeds and low resistance with reduced fuel consumption.

The vessel is equipped with a helideck for Sikorsky S-61N / S-92 and also features a vacuum sewage plant and a sewage treatment plant.

Areas dedicated for the seismic systems aboard the vessel include a seismic operation room, a server room, an air gun control room, a streamer store repair room, two battery stores, a back deck store, a bird shack, a tail buoy workshop, a tape store and a technical library.

The navigation systems aboard Polarcus Amani include an Electronic Chart Display and Information System (ECDIS) and a Differential Global Positioning System (DGPS). The navigational equipment featured in the vessel include Sea-Hawk navigation system, an S-band automatic radar plotting aid (ARPA) radar and an X-band ARPA radar.

The vessel accommodates 60 people in 32 single cabins and 14 double cabins. Other accommodation facilities include a mess room, an internet cafe, a gym and sauna room, a hospital, offices, a conference room, and a hotel.

"The vessel runs on four Wartsila diesel generator engines with a power output of 1,710kW each."

Aurora Borealis is a proposed icebreaker, drilling ship and multipurpose research vessel being developed by Ericon, a consortium of 19 institutions and agencies from 11 European countries with the European Science Foundation as the co-ordinator.

The propulsion system of the vessel enables it to sail at a maximum speed of 16kt.