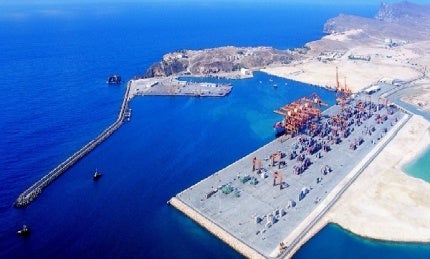 The Port of Salalah is located on the Gulf of Oman in the Arabian Sea and undergoing a major expansion to double its general cargo handling capacity. Construction works for the expansion project started in May 2012 and are expected to be completed by end of 2015.

Plans to build a permanent cruise terminal along with a 6,000m² business incubator space at the port are under consideration.

Details of the Port of Salalah

Port of Salalah became operational in November 1998. It was formerly known as Raysut Harbour or Mina Raysut or Port of Raysut.

The port features a container terminal with seven berths of up to 18m draft and a general cargo terminal (GCT) featuring 11 berths with draft of up to 16m. Both terminals serve local and regional communities of Oman in particular, and the Middle East in general.

The Port of Salalah has a container freight station (CFS) and other bulk cargo, containers and general and liquid cargoes handling facilities. The CFS became operational in 2002 and manages outbound and inbound cargo transportation at the port.

This project includes expansion of the general cargo terminal (GCT) and a liquid terminal. It will also involve the construction of additional 1,266m of multipurpose berths, a new Northern breakwater, facilities for dry-bulk commodities and a new liquid jetty.

The concrete quay berths will feature four docks with drafts of 16m to 18m. The berths will be designed to handle vessels with a deadweight capacity of up to 144,000t.

The new liquid jetty facility will increase the port’s efficiency in terms of handling fuels such as methanol, mono ethylene glycol and caustic soda. Dry bulk commodities such as limestone, gypsum and cement and plastics will also be handled at the port.

Contractors involved with the GCT expansion

Oman’s Ministry of Transport and Communications (MOTC) selected Hani Archirodon Construction (Archirodon) for the expansion project in May 2012, under an OMR55m ($143m) contract.