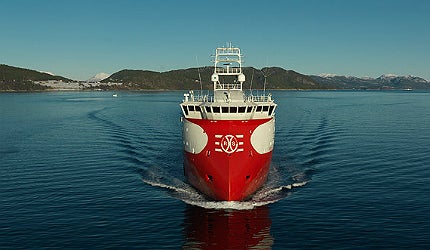 Rem Mist is a large platform supply vessel (PSV) built by the Norwegian shipbuilder Ulstein Verft for Remøy Shipping, a ship management company of the Remøy Group. She was delivered in May 2011 and immediately chartered to Statoil for operations in the North Sea.

Ulstein was contracted in May 2008 for the construction of two PSVs. The first vessel, Rem Hrist, was delivered in March 2011.

Construction on the second vessel was commenced in 2009, with the keel being laid in September 2009. She was launched in February 2011. The vessel’s hull was constructed in Kerch, Ukraine, by Zaliv shipyard.

"Ulstein was contracted in May 2008 for the construction of two PSVs. The first vessel, Rem Hrist, was delivered in March 2011."

Rem Mist has been built to cope with the tough requirements of the offshore industry. The main activities performed by the vessel include transportation of cargoes, carriage of dry bulk (as well as liquid bulk in tanks) and moving pipes and other general cargo on the open deck.

The vessel’s design is based on PX105 design series, which was developed by Ulstein Design & Solutions to meet future demands of the offshore industry. The PX105 vessels, due to their large and dependable platforms, can ship voluminous and general cargoes to offshore sites.

The 4,258t PSV is incorporated with Ulstein’s unique and eco-friendly hull design, which is popularly known as X-BOW. Based on an inverted bow concept, this unique hull line causes less hydrodynamic drag and therefore allows the vessel to operate on less fuel compared to ships with a conventional hull line.

The environmentally-friendly vessel carries DNV’s (Det Norske Veritas) Clean Design class notation and is provided with an oil recovery system which complies with NOFO 2005 standards. She is also certified (by Norwegian Maritime Directorate) to be used as a standby / rescue vessel for up to 250 people.

Rem Mist has an overall length of 88.8m, while length between perpendiculars is 82m. Moulded breadth is 19m and depth to main deck is eight metres. Design draught and maximum draught are 6.6m and six metres respectively.

Accomodation and capacities on the PSV

A total of 24 crew members can be accommodated onboard the vessel. The rooms are furnished as per the Ulstein accommodation standard. The cabin combination includes two state cabins with a day room and a bedroom, 12 one-bed cabins and five two-bed cabins.

"The 4,258t PSV is incorporated with Ulstein’s unique and eco-friendly hull design, which is popularly known as X-BOW."

Facilities aboard the vessel include a hospital, galley, mess, day room, smokers’ room, gym, dry provisions and cooler and freezer room. There is also a reception and rescue area. Other facilities include a deck pantry, wardroom and laundry.

The ship also carries brine, cement, base oil, glycol and drill cuttings, and is equipped for oil recovery operations.

Equipment onboard the Norwegian vessel

The PSV is equipped with a knuckle boom crane.

The crane’s safe working load at 18m outreach is 2t.

Propulsion and power of the Rem Mist PSV

Propulsion is provided by two azimuth thrusters. Each of these is run by vertically mounted frequency controlled variable speed electric propulsion motor.